The active/inactive flags for scatter points are particularly useful when dealing with transient data. For example, suppose that a set of scatter points represents TCE concentrations measured at a series of observation wells over a year's time. The locations of the wells and the measured concentrations can be imported to GMS as a scatter point set with a transient dataset. Once they are imported, the transient dataset can be interpolated to a grid and a film loop showing color shaded contours can be generated to illustrate how the plume has changed with time. However, in preparing the data for import, it is discovered that some of the data values are missing. One approach is to make up a dummy value for the missing sample and enter the entire dataset anyway. The problem with this approach is that it is difficult to determine an appropriate dummy value. Another option is to enter this value as a "non-detect". This causes the point to become inactive for the time step where the sample is missing. GMS disregards the point for that time step and performs the interpolation using the remaining active points.

The following methods can be used for controlling or assigning the active/inactive status of points:

If the scatter points are imported using the File Import Wizard then a special data value can be designated as NONDETECT. This value is typically assigned to a number not likely to be encountered such as -999. Then, as the dataset columns are being read, any value with the NONDETECT value is assumed to be inactive and the status flag is set accordingly.

After a scatter point set has been imported to GMS, the active/inactive status flags for the active dataset can be edited by selecting the Edit Inactive Flags button in the Dataset Info dialog accessed from the Dataset Properties dialog (this dialog is accessed from the Project Explorer). This brings up the Active/Inactive Flags dialog. This dialog is used to either delete all of the current active/inactive flags (making all points active), or enter one or more key values (ex., -999) which are used to inactivate all points with the listed values. 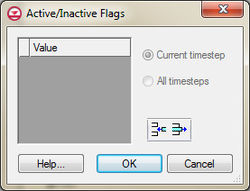