New nodes in a 2D mesh are created by selecting the Create Nodes tool from the 2D Mesh Tool Palette and clicking where the new node is to be located. The default parameters governing the creation of new nodes can be specified using the 2D Mesh Settings command in the Mesh menu. This brings up the Node Options dialog.

A set of selected nodes can be deleted by hitting the Delete key or selecting the Delete command from the Edit menu. If the deleted node is connected to one or more elements, the action taken when the node is deleted depends on the status of the options in the 2D Mesh Settings dialog.

If the Retriangulate voids when deleting option is turned on, the void created when a node and the elements surrounding the node are deleted is re-triangulated or filled in with triangles. This feature makes it possible to selectively "unrefine" a region of the mesh or reduce the density of the nodes in a region of the mesh without having to completely recreate all of the elements in the region.

If the Retriangulate voids when deleting item in the Node Options dialog is not set, the selected node and the elements surrounding the node are simply deleted and the resulting void is not filled in with triangles.

The coordinates of a 2D mesh node can be edited by selecting the mesh node and entering the new coordinates in the edit boxes in the Edit Window. It is also possible to drag an existing node to a new location by clicking on the node and moving the mouse with the button held down until the node is in the desired position.

If the Snap to Grid option in the Drawing Grid Options dialog is set, the node will move in increments corresponding to the drawing grid. If the node being dragged is connected to one or more elements, GMS will not allow the node to be dragged to a position where one of the surrounding elements would become ill-formed.

Convert Between Linear and Quadratic

If there are both linear and quadratic elements in the mesh (as may be the case with a disjoint mesh), a prompt will ask to specify the type of conversion desired; linear to quadratic or quadratic to linear.

The Merge Triangles command in the Modify Mesh menu can be used to automatically merge pairs of adjacent triangular elements into quadrilateral elements. Upon selecting the Merge Triangles command, a prompt will ask to input a minimum interior angle. This angle should be between 0o and 90o. If no elements are selected, all of the triangular elements in the mesh are then processed. If some elements have been selected, only the selected elements are processed. The conversion process works as follows:

This process is repeated for all of the elements. The merging scheme will not always result in a mesh composed entirely of quadrilateral elements. Some triangular elements are often necessary in highly irregular meshes to provide transitions from one region to the next.

The other option for merging triangles involves the use of the Merge/Split tool in the 2D Mesh Tool Palette. This tool can be used to manually merge triangles one pair at a time rather than using the automatic scheme described above.

The manual method is also useful to edit or override the results of the automatic merging scheme in selected areas. The Merge/Split tool can also be used to undo a merge. A quadrilateral element can be split into two triangles by clicking anywhere in the interior of the element. This tool is useful if a pair of triangles is inadvertently merged.

In some cases, a mesh does not have enough elements in a particular region of the mesh to ensure stability. Rather than inserting supplemental nodes and re-creating the mesh, it is possible to refine a selected region of the mesh using the Refine Elements command in the Mesh menu. This increases the mesh density of a selected area of the mesh. If no elements are selected, the entire mesh is refined. The elevations of the new nodes are interpolated from the existing nodes. 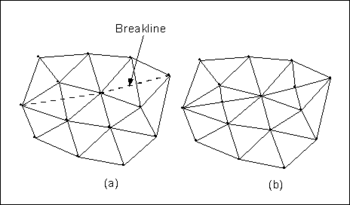 A breakline is a feature line or polyline representing a ridge or some other feature to be preserved in a mesh made up of triangular elements. In other words, a breakline is a series of edges to which the triangles should conform to, i.e., not intersect.

Breaklines can be processed using the Add Breaklines command from the Mesh menu. Before selecting the command, one or more sequences of nodes defining the breakline(s) should be selected using the Select Node Strings tool in the 2D Mesh Tool Palette.