How to import a MODFLOW model into GMS

Follow these steps when importing a MODFLOW simulation into GMS. 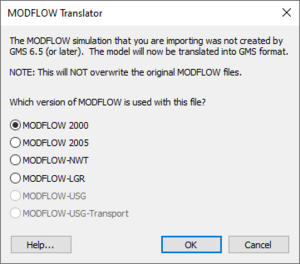 When importing a MODFLOW file into GMS, the MODFLOW Translator dialog may appear. If the MODFLOW file was not created in GMS 6.5 or later, the file must be translated into a format fully compatible with all of GMS' features and tools. GMS copies the file before performing the translation, so the original file is not changed by this translation process.

Select from the list of MODFLOW version so the translator knows how to interpret the file. The versions currently supported within the dialog are:

To tell if a file is MODFLOW 88 open up the basic package file as a text file. GMS uses *.bas as the extension for this file. The file should appear something like the figure below.

For a MODFLOW 88 file the third line of the basic package file will include an IUNIT array with 24 slots. There may also be an IUNIT array with only 12 slots, if so just ok the warning GMS gives. These slots include the unit numbers for packages included in the file. Every number must be unique to its package. If the number does not correspond to a file then the file is an external array which must be matched by the user. If the basic package file includes an IUNIT array as described it is a MODFLOW 88 file.

To import the MODFLOW 88 file locate the *.mfs file. If there is no *.mfs file then select the *.bas file. Then simply use the File | Open command to read the file into GMS.

GMS makes a few assumptions when reading in MODFLOW 88 files:

To tell if model files are in MODFLOW 96 format, open up the basic package file as a text file. For a MODFLOW 96 file the third line of the *.bas file will NOT include an IUNIT array. Instead the third line will say FREE, which means that the data in the file is in free format and each data entry is separated with a space. A 96 file may not contain the FREE line. Instead the line may be blank and the file may be fixed format. This file can be read in just the same using the name file.

If the basic package file says FREE as described it is a MODFLOW 96 file. A name file (typically with a *.mfn or *.nam extension) should also exist. If one does not it must be created as described below.

To open a MODFLOW 96 file locate the name file and use the File | Open command to read the file into GMS.

MODFLOW 96 files use a name file to identify the packages files. This replaces the IUNIT array used in MODFLOW 88. The advantage of it is that the files do not need to all have the same prefix in their name. The name file is laid out as shown below. In the first column the card name is given (see MODFLOW documentation for more information). In the second colum the IUNIT number is given. This number must be unique from all other numbers. The third column gives the file name and as stated does not need to have the same prefix for every package.

Depending on the version of the model, GMS will perform all or some of the following steps to convert the model into the standard GMS format.

Some modifications were made to mf96to2k.exe with regards to layer elevations and confining beds so that the program could be run in a non-interactive batch mode.

When mf96to2k.exe converts a MODFLOW 88/96 simulation to a MODFLOW 2000 simulation the program creates a discretization file (DIS). This file defines the layer elevations for the model grid as well as the stress periods. In MODFLOW 88/96 a model could be defined without the need for explicitly defining the top and bottom elevations of the model grid. If the old model has grid elevations defined in the BCF file then those elevations are preserved in the new MODFLOW 2000 DIS file. Where elevations are not defined in the old model then mf96to2k.exe would prompt the user to enter a constant elevation for the particular layer. When mf96to2k.exe is run by GMS these layer values are automatically set. After the model is read into GMS the user may need to edit these values.

Files Generated by Other Software

Other software such as Groundwater Vistas, Visual MODFLOW, and PM Win use their own file formats. However they do write out native MODFLOW files which GMS can read in. To use them make sure that the other software is saving out the files properly and then follow the steps above for the proper version of MODFLOW files.

^Note: to comment out a package, place a pound/number sign in front of a line. See the Online Guide to MODFLOW for packages that the USGS version of MODFLOW supports.

Here are some links to MODFLOW documentation that may be helpful.