Spatial attributes (or nodal attributes) are parameters that can be applied to the entire domain of the simulation in the form of a dataset with values assigned to the nodes of the mesh. ADCIRC supports several such spatially varying input parameters and SMS (starting with version 11.0) includes functionality to assist defining, managing and editing these parameters. With each release of ADCIRC, the list of supported nodal attributes changes. There are several such attributes that are under development and are used by individuals in the ADCIRC community, but are not available in the release version. Therefore, the interface in SMS is a combination of specifically defined attributes to correspond with the standard parameters in ADCIRC and custom attributes to allow for customization and support of attributes not yet included in either the ADCIRC release or the standard list in the SMS interface.

Define these attributes in a the Spatial Attributes dialog under the ADCIRC menu. There are a number of predefined attributes that can be used or custom attributes can be defined. Here is a list of the predefined spatial attributes and a brief meaning of each.

In version 50 of ADCIRC, the following predefined nodal attributes are supported:

Please visit the ADCIRC web site to learn more about the meaning of each of the spatial attributes listed above.

How to Use Spatial Nodal Attributes in a Simulation 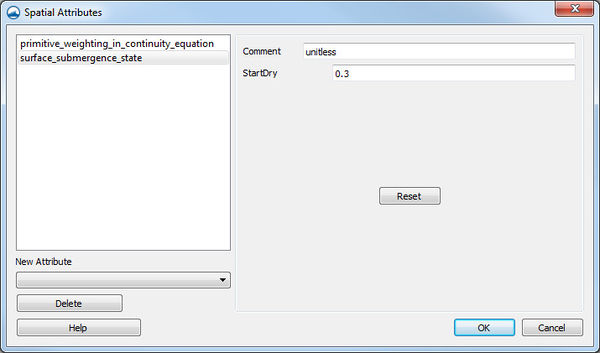 Create a new spatial attribute by selecting the attribute name in the New Attribute combo-box. This will bring up the Spatial Attributes Initial Values dialog (discussed below).

The top left of the dialog has a list of the currently defined spatial attributes. The currently selected spatial attribute can be modified by the controls on the right side of the dialog or by editing specific dataset values by selecting the specific node(s) and entering a value. Each attribute has an associate comment. The comment is ignored by the model and is generally used for units information. The value below the comment is intended to represent the default value, or the value used the most in the dataset. Values at nodes that do not use the default value are written by the SMS to the fort.13 file as exceptions. The reset button will bring up the Spatial Attributes Initial Values dialog (discussed below).

The Initial Values dialog is used to setup the initial values for the dataset(s) used for the spatial attribute.

Every spatial attribute has the option of starting from a constant value or use the values from an existing dataset. In addition, some spatial attributes have an option to populate the spatial attribute based upon other data inside of SMS, using a rule, or using a utility similar to those provided on the ADCIRC websit to generate. 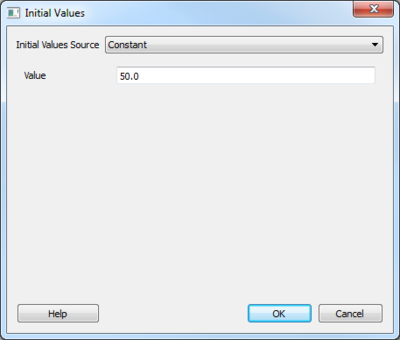 A spatial attribute consists of one or more datasets that can include unique values at each of the nodes in the mesh. This is potentially a lot of data and will generally not be specified manually. Two options exist for general population of the dataset. These include:

In addition to these two default methods of populating data sets, SMS supports some custom population approaches for specific attributes. These are described below.

The SMS includes a tool for populating the primitive weighting coefficient for each node based on the node spacing and the node depth. Specify a threshold for node spacing (Critical average node spacing) and depth (Critical depth). The defaults for these are 1750 m and 10 m respectively. Also specify a values for tau for three conditions including default (0.03), deep (0.005) and shallow (0.02).

The spatial attributes which reflect bottom friction "Chezy_friction_coefficient_at_sea_floor," "Mannings_n_at_sea_floor," and "quadratic_friction_coefficient_at_sea_floor" can be populated from NLCD land use data. Obtain NLCD geo-tiffs from the Multi-Resolution Land Characteristics Consortium website (www.mrlc.gov). Use the seamless server to download the data in the area of interest. To populate using this method, download the NLCD geo-tiff for the region of interest, load it into the SMS (creating an image), and convert it to a raster (right-click on the image). (Refer to the information of rasters for guidance).

The surface directional effective roughness length composes the contributing vegetation types associated with each of the 12 directions (30 degrees each) around each node in a mesh and assigns the 12 characteristic or composite reduction values to the datasets for the node.

The SMS includes an option to populate these values using NLCD land use data raster objects. These must be loaded before populating this attribute. Specify a Total distance to be included in the computation of the directional roughness as well as a Weighted distance and method of interpolation. Also specify a roughness value for each land use type.

This is in accordance with the utility provided on the ADCIRC web site for generation of this attribute. The SMS invokes this utility to compute an effective roughness for each cell for each direction.

The surface canopy attribute provides a method for ADCIRC to reduce wind stress at specific locations in the mesh to represent the protection afforded by local vegetation. The SMS includes an option to populate these values based on NLCD land use raster objects (which must be loaded prior to generating this parameter).

Specify whether to compute the reduction based only on the nodal location, or based on the area of influence around a node (half the distance to adjacent nodes). If the area of influence method is used, the use can also specify a percentage cover that must exist for a reduction to be applied. Finally, specify a roughness reduction to be applied for each land use (vegetative cover type).

The name of a spatial/nodal attribute is key for its use in an ADCIRC simulation. ADCIRC reads the name from the fort.15 file and the corresponding values from the fort.13 file. If the name does not match a supported attribute in that version of ADCIRC that is being used, it is ignored. For this reason, the SMS interface includes the specific names supported by ADCIRC at the time of development. This minimizes the possibility of errors when entering the name of a nodal attribute.

In either case, select the Custom... option from the New Attribute combo box and the Spatial Attribute – Custom dialog appears. This dialog allows specifying a name for the attribute, which must match the expected string in the corresponding version of ADCIRC. Also specify a comment, and the dataset(s) name(s) associated with this attribute. By clicking OK, the Initial Values dialog appears which defines how to populate each dataset.