Listed below are the general commands in the Scatter menu.

Scatter options are accessed through the Scatter menu, Scatter Options dialog in the Scatter Module. 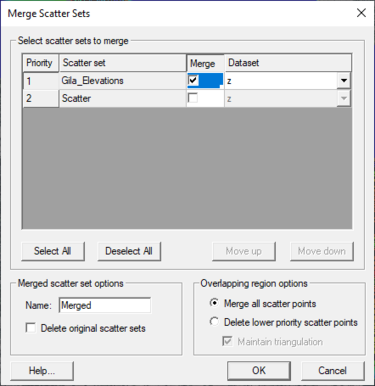 The Priority column of the spreadsheet is only used if the overlapping region option is set to Delete lower priority scatter points. This option is explained below.

The following options are available when merging scatter sets:

When the merge finishes a merge report will be displayed on the screen. This report shows statistics for the scatter sets that were merge such as number of vertices and triangles before and after the merge. If desired vertices are being deleted, check the duplicate points tolerance. This is found in the Scatter→Scatter Options dialog. 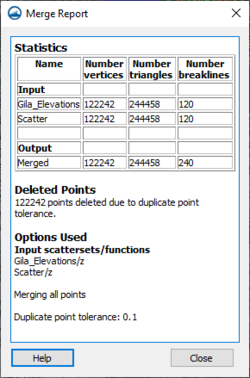 Active when a scatter point, or group of points, have been selected. This brings up a dialog that allows assigning a unique name to the selected point. 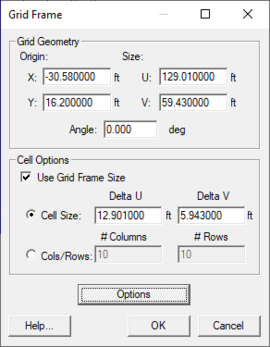 If a scattered dataset exists, the Interpolate to Scatter Grid menu item (Scatter module, Scatter menu) brings up the Grid Frame dialog. This dialog, positions the purple grid frame and sets up the number of rows and columns in the grid. After clickingOK, a new scatter set is created with scatter points at the corners of each grid cell. The original scatter set is interpolated to the new scatter grid set using linear interpolation.

Interpolate from Other Scatter

This option creates a nautical chart. A nautical chart divides a scatter set into bins and finds the maximum, minimum, and average depth over each bin. The Interpolate to Nautical Grid menu item (Scatter module, Scatter menu) brings up the Grid Frame dialog. The dialog positions the purple grid frame and sets up the number of rows and columns in the grid. After clicking OK, a new scatter set is created with scatter points at the center of each grid cell. Three functions are created for each scatter point from the active scalar function of the original scatter set:

Requirements to interpolate to a nautical grid include:

The following commands are no longer available in current released of SMS: