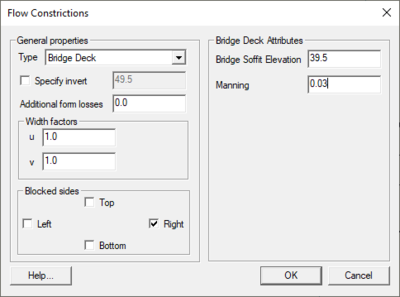 Here is the description from the TUFLOW manual:

Four layers (not GIS layers!) are represented, with the bottom three layers each having their own attributes. The top, fourth, layer assumes the flow is unimpeded (eg. flow over the top of a bridge). Within the same shape, the invert of the bed, and thickness of each layer can vary in 3D. Each layer is assigned its own percentage blockage and form loss coefficient. For example, the layers of a bridge structure would be along the following lines.

Layered FCs function by adjusting the flow width of the 2D cell so as to represent the combination of blockages of the four layers, and by accumulating the form losses. When the flow is only within Layer 1, only the attributes of Layer 1 are applied. As the water level rises into Layer 2, the influence of the Layer 2 attributes increase as the water continues to rise. Similarly for Layer 3 and Layer 4.

The cell side flow width is calculated by summing the flow areas of each layer (including the effects of layer blockages), and dividing by the water depth. The form losses are applied as follows:

Arcs on the perimeter or within a polygon flow constriction can be used to spatially distribute the properties above. To use an arc for elevations, specify it to be the "Breakline Elevations" type in the arc properties dialog. Elevations can be specified at nodes at the end of arcs but not on intermediate vertices. Therefore, in order to represent curved flow constrictions or changes in slope, it's necessary to convert vertices to nodes to create multiple arc segments. These arcs will become breaklines in the TIN generated by TUFLOW. Points within a polygon can also be used to specify elevations and will become an individual point in the generated TIN.

To create a flow constriction for an arc or polygon: 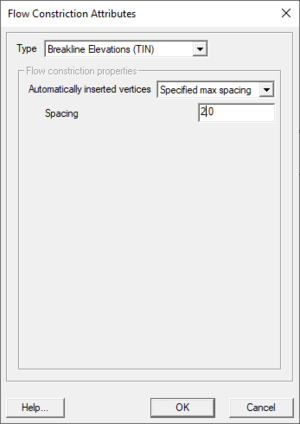 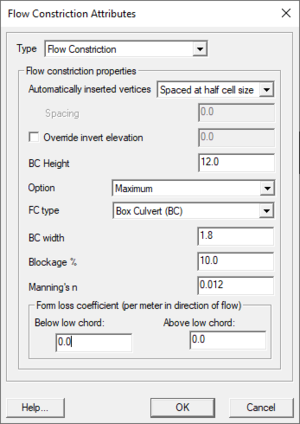 For box culverts (BC), the Manning’s n of the culverts (typically 0.011 to 0.015) should be specified. This value prevails over any other bed resistance values irrespective of where in the *.tgc file they occur (the exception is if another FC BC object overrides this one). If set to less than 0.001, a default value of 0.013 is used.

For bridge decks (BD), can be used to introduce additional flow resistance once the upstream water level reaches the bridge deck low chord/obvert (or soffit). For floating decks (FD) this is always the case as the deck soffit is permanently submerged. The additional flow resistance is modelled as an increase in bed resistance by increasing the wetted perimeter at the cell mid-side by a factor equal to (2.*Bed_n)/FC_n. For example, if the FC Manning’s n and the bed Manning’s n values are the same, the wetted perimeter is doubled, thereby reducing the conveyance and increasing the resistance to flow. To be used as a calibration parameter to fine-tune the energy losses across a bridge or floating structure.

All nodes have the option of overriding the invert height at their location. Beyond this, the fields available in the node attributes dialog change based on whether the node is inside (or on the edge) of a layered flow constriction polygon. If so, the node properties will resemble that of the layered polygon's with layers 1–3. Otherwise only the Low chord (obvert) can be modified.

As with polygons, the low chord can actually mean different things depending on the settings of FC Type and other factors. This is determined by the polygon the node is on or inside of. 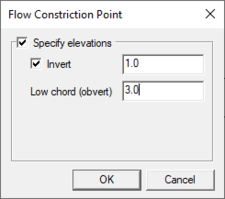 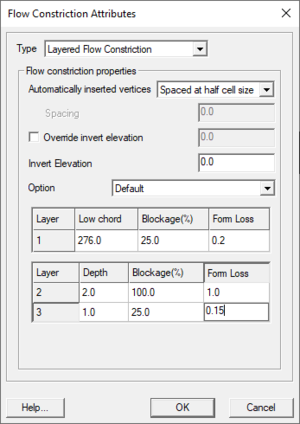 Because it's hard to glean applicable knowledge from a dry description of dialogs, here's an example of how they might be used. To create an arched bridge using a flow constriction polygon and breakline elevations, do the following: 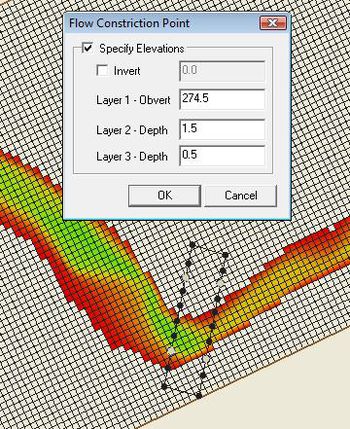 There is now an arched bridge that will look something like the image below from the side. There is an added 25% blockage under the bridge to cover things like pillars holding the bridge up, vegetation, fairy-tale trolls hiding underneath, and so on. Layer 2 is the bridge itself, which provides 100% blockage because the bridge is solid concrete and does not allow any water to flow through that section. Above that, the railing gives 25% blockage but otherwise lets water through just fine. And above that? Nothing—any water that rises above the railing of the bridge is completely unrestricted.

The varying width of Layer 2 allows creating a bridge that is thickest on the ends of the bridge and thin in the center. The Layer 1 blockage takes support pillars into account, and TUFLOW will automatically determine how much of layers 1, 2 and 3 are affecting the water at any given time and calculate the flow constriction from there.