WMS has an interface to enable importing, exporting, viewing, and editing DSS files inside of WMS.

The DSS File Editor is used to view and edit a DSS file. This dialog comes up when reading a DSS file from the XY Series Editor or from the Open command in the File menu: 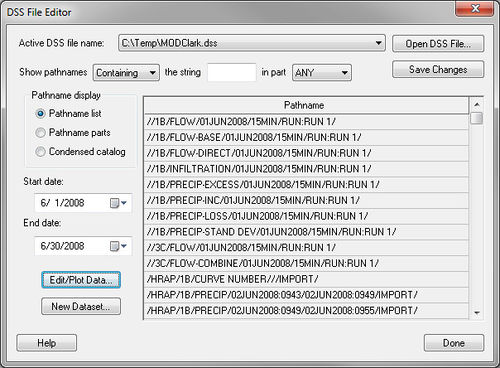 The following gives a description of the functionality of the DSS File Editor.

This combo box displays a list of DSS file names that were selected using the Open DSS File button.

This button saves any changes made to the active DSS file.

Show Pathnames with the String Options

Remember that a single DSS file can have several pathnames, and that each pathname is broken up into six parts—A, B, C, D, E, and F. Since there can be hundreds of pathnames in a DSS file, it is useful to be able to search for text in the pathnames. That’s what these options are for.

The edit field starts out with nothing in it. As entering something in this field, only those pathnames containing what has been typed are displayed. The search is case insensitive.

This button brings up the data from the DSS file for the selected pathname in the XY Series Editor which allows editing and plotting the data.

This button brings up the New DSS Dataset dialog which allows entering the pathname and other information for a new dataset: 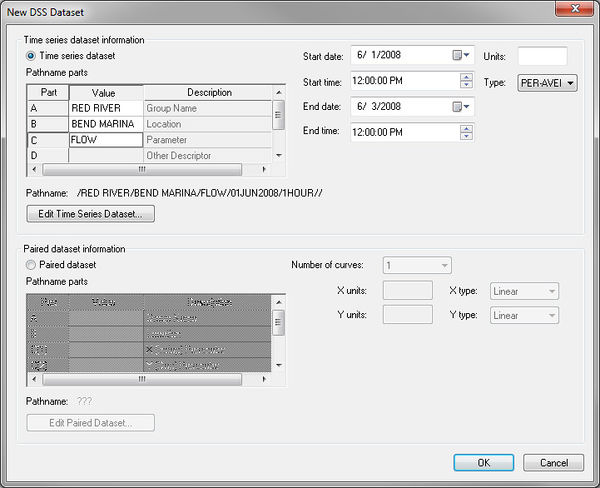 Selecting the Edit Time Series Dataset button brings up the XY Series editor which allows editing the time series dataset. Selecting the Edit Paired Dataset button brings up a spreadsheet (see below). The first editable column on this spreadsheet contains X values and the second, third, and other columns will contain Y data (Y-1, Y-2, Y-3, ) up to the number of curves specified in the combo box in the New DSS Dataset dialog. 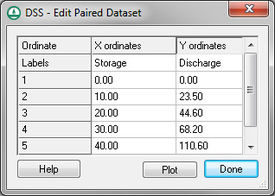 The "pathname" spreadsheet (in the DSS File Editor dialog) lists the pathnames of all the records in the active DSS file, based on the Pathname display options.