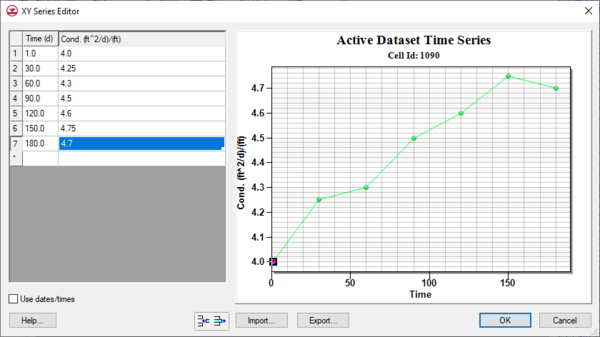 The XY Series Editor is a special dialog that is used to generate and edit curves defined by a list of x and y coordinates. The curve can be created and edited by directly editing the xy coordinates using a spreadsheet list of the coordinates. An entire list of curves can be generated and edited with the editor and curves can be imported from and exported to text files for future use. It is also possible to paste xy data directly to the spreadsheet.

The XY Series Editor is used in GMS, SMS, and WMS. It was designed to be general in nature so that it could be used anywhere that a curve or function needs to be defined. In some cases, the x values of the curve must correspond to a pre-defined set of values. For example, the x values may correspond to a set of time steps whose interval is established in a separate dialog. In such cases, the x fields cannot be edited but the y values associated with the pre-defined x values can be edited. In other cases, there is no limit on the number of x values or on the x spacing and both the x and y values can be edited.

The two vertical columns of edit fields on the left side of the dialog are for direct editing of the xy series values. A pair of application specific titles appears at the top of the columns.

Use dates/times
For selected situations such as entering time series data in the Map module, it is useful to enter the data in date/time format. Checking this toggle allows the x values in the curve to be entered in date/time format.
Import/Export Buttons
The Import and Export buttons allow reading in or saving an xy series file.