The WMS software development team is excited about the release of WMS 8.3 (beta)! This page lists the exciting new features that have been added to WMS 8.3. 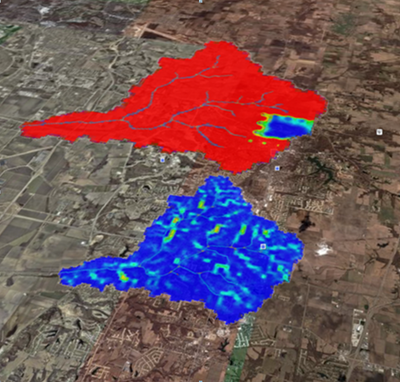 Using WMS 8.3 you are able to select the solution dataset, the scattered data dataset, and the rainfall dataset and export all three to a KMZ file. In the film loop dialog, you can specify the display elevation associated with your rainfall dataset, and view rainfall intensity at the same time you are viewing its effects in the overland plane and the river network. 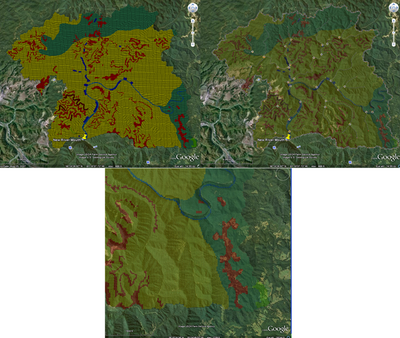 With WMS 8.3 you get a variety of visualizing options. For example, the different index maps that can be created in WMS can now be exported as .kmz files that can be displayed in Google Earth. 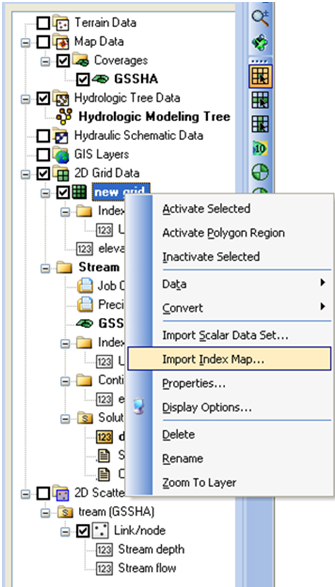 WMS 8.3 allows you to import any index map file, such as Land Use, Soil Type, Combined Index Map, etc. from one GSSHA project to another GSSHA project with the same grid.

Constituent Mass in the overland plane and channel network

Support of Contaminant Transport and NSM modeling in GSSHA

WMS 8.3 supports constituent transport modeling, which can be simulated as simple first order reactants or with the full nutrient cycle using NSM. You can input a constituent concentration at any point in your watershed (point and/or non point source) or on a stream and then GSSHA outputs maps of mass and concentrations at each point in your watershed and in your stream network.

NSM can be coupled with any hydrologic and hydrodynamic model transport component; this means that NSM deals with transforming processes of water quality constituents in the overland plane and receiving water bodies. Tutorials for each of these capabilities are available on gsshawiki.com.

Not only can constituents be visualized in the overland flow plane at any cell in your watershed, but specific plots of constituent mass and concentrations can be generated in the outlet of your watershed using WMS 8.3. This works both for simple first order reactants and for NSM constituents such as nitrogen, phosphorus and carbon species.

Using WMS 8.3 you can model coastal storm surges or areas around a standing water body using overland flow boundary conditions, which can be defined as constant slope, constant stage (water surface elevation), or variable stage (water surface elevation). GSSHA will take a map of the boundary conditions and apply that condition at the beginning of each time step. 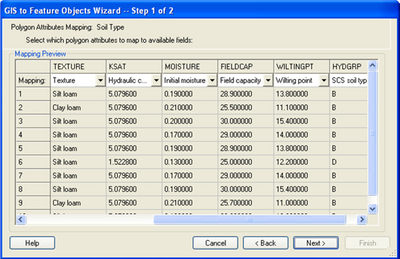 This figure shows the different values extracted from the SSURGO soil that are mapped in the WMS soil coverage.

Using the “Join SSURGO Data” command in WMS 8.3, you can now join more attributes besides those associated with the *.dbf file. Attributes such as hydrologic soil group (HYDGRP), texture, hydraulic conductivity (KSAT), moisture, field capacity (FIELDCAP) and wilting point (WILTINGPT) can now be mapped to the WMS soil coverage. 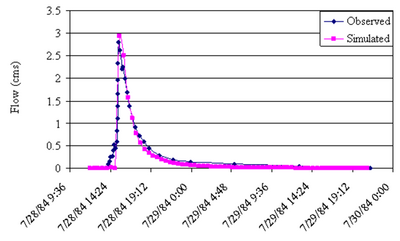 Plot of observed data and calibrated data for Reynolds Creek

Besides having the capability of running in calibration mode or batch mode, with WMS 8.3 you can automatically read in and run a model with the calibrated parameters and decide whether or not to substitute them into your model.