From XMS Wiki
< User:Mkennard
Jump to navigationJump to search 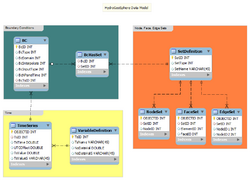 The HydroGeosphere Data Model documents a relational database method of storing data used by the numerical model HydroGeoSphere. The data model is being developed to be compatible with the Arc Hydro Groundwater Data Model.

The wiki tables below document the tables in the relational database. The table name and the field (column) names and types are given along with descriptions.

OBJECTID fields with type OID are integer fields that are automatically numbered by the database system and serve as the primary key in the table. The primary key field is marked by the

A sample database can be found here. This database is in SQLite format. There are a number of free SQLite readers you can use to examine the database. SQLiteSpy is one and can be found via a Google search.

A version of HydroGeoSphere that reads and writes the database can be found here.

The SetDefinition table stores the node, face or edge set name and its type.

Boundary conditions are stored in the BC table. The TsID is used to associate a time series with a BC. A boundary condition is associated with a node set, face set or edge set via the BcHasSet table.

The BcHasSet table associates BCs with sets. The table is necessary for a many-to-many relationship between BCs and sets. That is, a BC could be used on more than one set, and a set could use more than one BC.

If it is decided that a BC can be associated with only one set, then an alternative is to eliminate the BcHasSet table and put a SetID field in the BC table. Then there would be a one-to-many relationship between sets and BCs, meaning one set could be used by many BCs.

If it is decided that a set can be associated with only one BC, then an alternative is to elminate the BcHasSet table and put a BcID field in the SetDefinition table. Then there would be a one-to-many relationship between BCs and sets, meaning one BC could be used by many sets.

Another alternative is to have a one-to-one relationship between BCs and sets, in which case the BcHasSet table can be eliminated and the BC and SetDefinition tables could be merged into one table. However, if it is desirable to create one without the other - for example to create the sets first and the BCs later - then we don't want to use this approach and they should be kept separate.

Time is patterned after the AHGW data model which is currently in draft version. Some draft documentation on it is available here.

Coded value domains are like enumerations in C++. They define a set of values a variable can have.