SMS has many utilities that can be used to modify feature arcs. Most of these can be accessed by selecting and right-clicking on the arcs that are to be operated on.

This command deletes the selected arcs. SMS will prompt to confirm that the deletion is desired if the Confirm Deletions option is enabled in the SMS Preferences.

Arcs are used to represent features in a conceptual model. A feature arc may represent a very small (short) individual feature, or it may represent a convoluted complex feature such as an entire shoreline. Two sample applications include arcs representing a shoreline, or arcs representing the thalweg of a river. There are advantages to having a single arc represent a long feature. These include the ability to select the entire feature easily, it is less cumbersome to manage the feature because there are less features, and to ensure that there are no gaps in the feature because it is a single arc. However, there are also applications and purposes for splitting the arc into pieces. One such example is illustrated by the change of shape an arc undergoes when it is redistributed. The vertices move, but the feature nodes do not. In this situation, making key points nodes prevents the arcs shape from loosing its ability to represent these key locations. In the case of a thalweg, it could be advantageous to have a separate arc for each section of the river. Each arc would then span from one river station to another (perhaps every 100 yards or meters, or each river mile).

This utility is in the right-click menu when selecting one or more arcs. The command brings up the Split Arcs Tool dialog. In this dialog provide criterion for splitting the selected arc(s) into multiple arcs. If desiring to process all the arcs in a coverage, use Select All first.

There dialog includes three toggle boxes associated with criteria including: 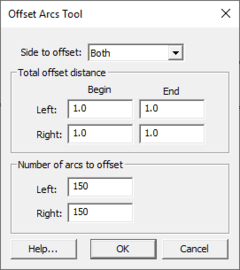 The offset arc command (arc right-click) provides a mechanism to create additional arcs in a coverage by offsetting from the selected arc(s). Multiple offsets can be created in a single command. This command brings up a dialog that asks for a number of parameters including:

This command uses the orientation of the selected arc as a basis meaning it knows one end of the arc as the "start" and the other as the "end". This convention is determined based on the creation of the arc. This direction is not always obvious, so it may be necessary to investigate using trial and error which end is the start and which end is the end (as with bias in the redistribute command).

This command has several useful applications. These include:

This command (arc right-click) can only be used when the project has scatter data. A dialog is brought up from which a scatter dataset, dataset value, and maximum distance are set. SMS will then move the vertices along the selected arc to locations where the scatter dataset value matches the dataset value specified in the dialog, as long as it is not moved by a distance greater than the maximum distance (also specified in the dialog). This is done by processing each location individually. For each point, SMS extracts the contour value from the TIN/dataset and the gradient of the TIN at the (x,y) location. It then tracks up or down gradient to intersect with the contour at the specified dataset value. If a local extrema is encountered before finding the contour, the operation fails.

The current status of the selected arc(s) is given at the top of the dialog. This includes the number of segments and spacing of those segments. When multiple arcs are selected, the current status is a combination of all selected arcs. However, the parameters set in this dialog apply to each arc individually. Therefore if multiple arcs were selected, each arc would reflect the options selected in this dialog.

In versions of SMS prior to 13.0, vertices on an arc would be redistributed during a scalar paving operation to match the target size function if possible. This operation could be useful outside of the mesh generation process, and may not always be desired during mesh generation, so it was separated into a separate operation.

Vertices along an arc can be redistributed using a size function dataset. This options is selected in the Redistribute Vertices dialog. Once the Size Function option is set, a dataset must be assigned. Clicking the Options button will bring up dialogs that allow assigning the size function.

The following options are available for redistributing vertices:

If the Use Cubic Spline option is specified, vertices are redistributed along a series of cubic splines defined by the original vertices of the selected arcs. The difference between the linear and spline interpolation methods is illustrated in the figure below.

The "Source arc" option is only available when two arcs are selected. One arc is specified to be the source arc while the other is the target arc. SMS redistributes the vertices on the target arc so that the vertices on each arc correspond with each other on opposite sides of a channel or embankment.

This command (Feature Objects in the Map module or right-clicking on a selected arc) reverses the direction of all selected arcs. Arc orientation is only important for applications that use coastline or centerline arcs that have an arrow drawn on the arc. 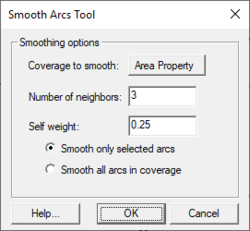 This command reduces the variability or roughness of an arc. When an arc is created by digitization, it includes the manual variations and noise from the digitization process. Similarly, when an arc is created to follow a contour line, it can have numerically created corners and bends. Smoothing an arc results in more gradual bends in the shape of the arc. Applying the smooth command repetitively will eventually result in a straight line.

An arc should not be smoothed, if the meanders and bends accurately depict a physical feature. However, smoothing may result in more gradual variations that can enhance numerical stability.

The algorithm computes a new position for each vertex in the arc from the existing vertex positions. The number of neighbors must be the same both before the vertex being smoothed and after. Since there are no vertices before the first node, and none after the last node, these two locations are not impacted by the smoothing process. The first vertex can be smoothed using the first node from before its position, and the first vertex after its position.

The Create Arc Group command is found in the Feature Object menu of the Map module. By selecting multiple arcs and using this command, the arcs will be made into a group. When selecting any one of the arcs in the group, all arcs in the group will be selected. 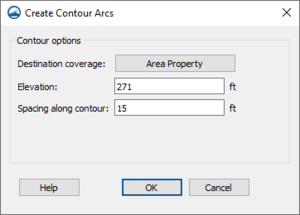 The Create Contour Arcs dialog is used to create a feature arc along a specified elevation of the active scatter dataset or cartesian grid elevation. To access the dialog do the following:

Feature Arc Attributes depend on the type of coverage being used. A purely geometric arc would have no special attributes, but arcs may be used to define specific types of features such as a coastline, open ocean boundary, stream thalweg, or edge of water. In addition, feature arcs may have model specific boundary condition definitions which should be applied to a geometric object of that model type at the location of the arc.

The Arc Attributes dialog is a dynamic dialog that will provide different options depending on the coverage type. 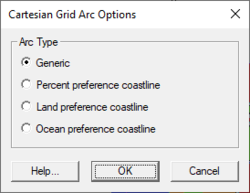 The Cartesian Grid Arc Options dialog is an arc attributes dialog for grid based map coverages.

This function (found in the Feature Objects menu) can be used if an arc's "Computational Length" value on a river changes. It sets the Start and End station values for each of the arcs with the same river name based on the computational lengths of each arc. So, for example, if there are 3 arcs in a river, the most downstream arc being 30 feet, the next arc being 40 feet, and the next arc being 50 feet, the starting and ending stations would be as follows for each of the arcs (Arc 1 is downstream):

These start and end stations are set when assigning a river name to an arc, so there there should not be a need to use the Recompute All Stations command unless there is a change in the computational length, start station, or end station values for a centerline arc. 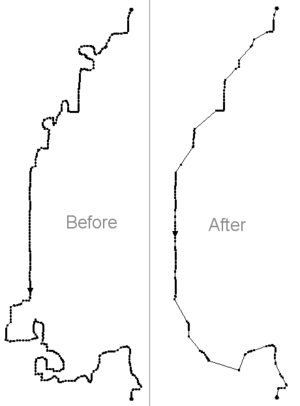 Arc before pruning and arc after pruning

If two non-neighboring vertices are within a certain width of each other in such a way that a concave section of the arc is formed, then the vertices between the two vertices can be removed. This pruning smooths out the arc in the concave area without changing the distribution of vertices along the rest of the arc. Importantly, this tool can be used to remove concave sections along one side of the arc. 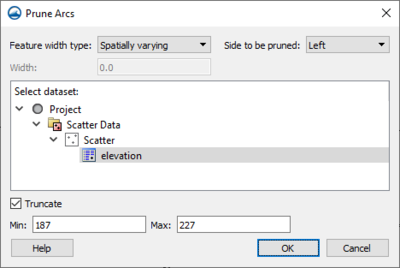 Example of the Prune Arcs dialog

To prune an arc, right-click on the selected arc and select the Prune Arc(s) command. The Prune Arcs dialog has the following options:

Side to be pruned based on arc direction