The CGWAVE Graphical Interface includes tools to assist with creating, editing, and debugging a CGWAVE model. The CGWAVE interface exists in the 2D Mesh Module.

There is a very consistent method that can be used to apply the CGWAVE model. The steps to this process include:

CGWAVE makes use of the standard menus along with the CGWAVE menu. The following menu commands are available in the CGWAVE Menu:

Model Control
Brings up the Model Control dialog to specificy model parameters.
Run CGWAVE
Brings up a dialog that checks what executable of CGWAVE should be run and then runs the model with the currently loaded simulation. As the model runs, a dialog monitors progress of the model and gives status messages. When the run is complete, the spatial solutions are read in for analysis and visualization.

The CGWAVE Model Control dialog is used to setup the options that apply to the simulation as a whole. These options include time controls (steady state/dynamic), run types, output options, global parameters, print options and other global settings. 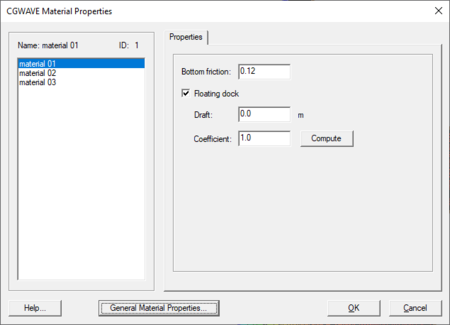 The CGWAVE files are written automatically with the SMS project file or can be saved separately using the File | Save CGWAVE or File | Save As menu commands.

CGWave creates a single output file (normally including *.cgo extension when run with SMS). This file can be brought into SMS to graphically view the results. As SMS reads the file, it translates (using an embeded version of the CGWAVE "trans" code) the complex numbers representing wave heights and phases for each wave component into spatial and temporal datasets including:

When the solution is read in, SMS allows limits to the wave heights in the solution. This only applies to linear runs of CGWAVE to allow the heights to be adjusted to be more realistic. This is accomplished by applying a factor, whose value ranges from 0 to 1 (defined as H/d). (Because wave height cannot exceed the value of depth or factor=1). SMS recommends a range of 0.4 to 0.8 and defaults to 0.64. If desired, enter another factor dependent on knowledge of wave mechanics, type of problem, etc.