A dataset is a set of values associated with each node, cell, vertex, or scatter point in an object. A dataset can be steady state (one value per item, one time step) or transient (one value per item, multiple time steps). The values in the dataset can be scalar values or vector values. Certain types of objects in SMS have an associated list of scalar datasets and a list of vector datasets. Each of the following objects in SMS can have both scalar a vector datasets:

Datasets are used for both pre- and post-processing of models. For example, a scalar dataset associated with a 2D mesh can represent starting values of elevations or initial water surface elevations for a surface water modeling problem. Another dataset associated with the same mesh may represent computed water surface values. Datasets can be used to generate contours, vector plots, functional surfaces and animation sequences. The commands for manipulating datasets are located in the Current Model's Data menu.

Datasets can be generated in a variety of ways such as:

Datasets are displayed and managed in the Project Explorer. Right-clicking on a dataset invokes the right-click menu which consists of a list of commands that can be performed on the dataset. 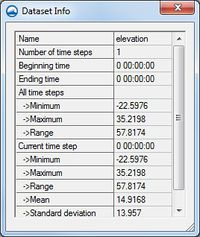 A dataset consists of a set of values. It is often useful to be able to get general information about the dataset. SMS displays this information in the Dataset Info dialog which is invoked by right-clicking on the dataset and selecting the Info... command.

The dialog displays the following information:

If the active dataset is transient then the time steps are displayed in the Time Step Window.

Solutions are output from a numerical model that SMS supports. Solutions are shown in the Project Explorer as a folder. If a solution is transient then the time steps are displayed in the Time Step Window. The solution may contain text files such as the *.out and *.prt files produced by a model. These files can viewed by right-clicking on the item and selecting View File from the pop up menu, or double-click on the item.

The datasets and solutions are organized by folders. New folders can be created. It is possible to move datasets, solutions, and folders into other folders anywhere on the Project Explorer. Folders can be created by right-clicking on the certain items in the Project Explorer and selecting New Folder in the menu. A dataset or folder can be deleted simply by selecting the folder and pressing the DELETE key or by right-clicking on the item and selecting the Delete option in the corresponding pop-up menu.