Two meshes can be merged to form a new mesh which will be called "Merged" (or "Merged (##)" if that name is already used) in the Project Explorer. No model data will be transferred, and the type of the new mesh will be the same as the default mesh model set in the Preferences regardless of the model type of the meshes used in the merge (to check the Preferences, go to Edit | Preferences... and check the Defaults tab for the Default 2D Mesh Model). The Merge 2D Meshes command is accessed by selecting two meshes, right-clicking, and selecting Merge 2D Meshes. This will bring up the Mesh 2D Merge Options dialog.

If the two meshes being merged overlap, SMS will report this and give the option of aborting the merge.

When merging two meshes that overlap, SMS includes all nodes from both meshes, and forces one of the previous mesh's boundaries to be honored in the merged mesh. Any disjoint nodes in the meshes will be deleted. 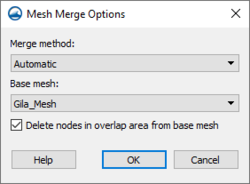 The Mesh 2D Merge Options dialog has the following options to determine whitch method SMS will use in merging 2D meshes.

One common feature that may be desired would be to only include nodes from one of the two meshes in the overlap region. This feature is under consideration. To get this result with current functionality, the following steps may be followed:

Note: If wanting to maintain the original meshes in this process, create a copy of the low priority mesh to edit before performing the steps. This copy can be deleted after the merge process if desired.
Note: The boundary condition attributes will only be preserved for the mesh given high priority. Boundary condition attributes for the low priority mesh will need to be specified again in the merged mesh.

Examples of Meshes that are not considered overlapping

Examples of Meshes that are considered overlapping