RMA4 has a number of tools for working with boundary conditions.

Starting in SMS 10.1, it is now possible to assign a mass loading to an element.

To do this, select the element then go to RMA4 | Assign BC. This will bring up the RMA4 Assign Element Mass Loading dialog. 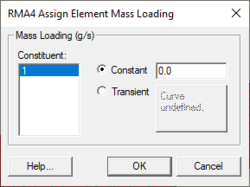 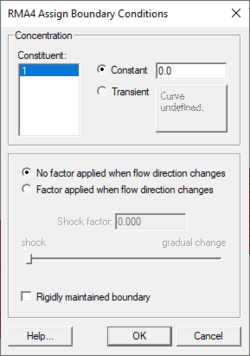 RMA4 does not care about the units of the concentration because the output is relative to the initial number specified. For example, if we specify a concentration of 1,000, the values in the solution will range from 0 to 1,000 as the plume spreads downstream. We can say that the concentration is ppm, ppt, or kg/kg; RMA4 treats all concentrations as relative values.

By right-clicking on a selected nodestring and selecting Assign BC | RMA4... will bring up the RMA4 Assign Boundary Conditions dialog. The dialog has the following options:

A boundary mass loading can be added to an element in the mesh by selecting first the desired element and then the RMA4 | Assign BC menu command. This opens the RMA4 Assign Element Mass Loading dialog where a constant or transient entry can be made in grams/second for each constituent defined in the RMA4 model control dialog. The time variant option uses a XY Series File, XYS Format editor to enter a series of time step-mass loading pairs. The time steps should be consistent with those of the RMA4 simulation and for each constituent. The mass loadings may be deleted using the RMA4 | Delete BC menu command.