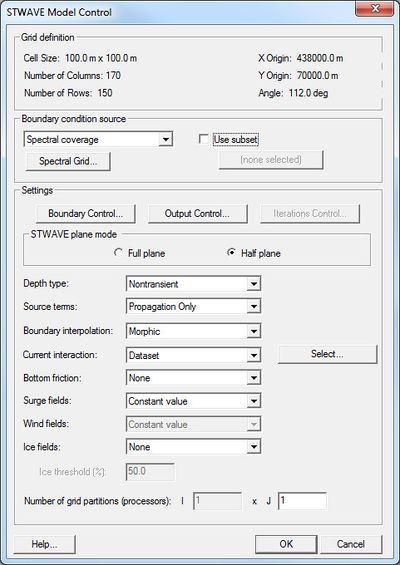 The Model Control…command in the STWAVE Menu opens the STWAVE Model Control dialog. This dialog is divided into sections for different types of parameters which are used during the model run. These include:

The grid definition section of the model control reports defining characteristics of the grid including:

The boundary condition for STWAVE consists of one or more energy spectra entering on one or more open edges of the grid. Traditionally, specify a single spectra that is assigned to all of the cells on the offshore edge. In this situation specify one spectra for each wave case or time snap being simulated. Alternately, the input spectra can be interpolated to the cells on the offshore edge(s) from a parent STWAVE or WAM grid.

The STWAVE Output Control dialog is used to specify the solutions files STWAVE should output.

The following datasets are always written: 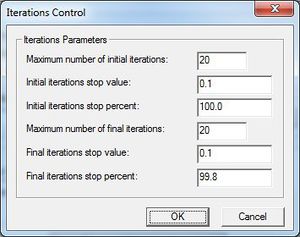 The STWAVE Iterations Control dialog is reached through the STWAVE Model Control dialog. Here the number, stop value, and stop percent of iterations can be set. The dialog contains the following options:

Datasets may be used as input to STWAVE to represent spatially varied currents, bottom friction (either manning's or JONSWAP), surge, or wind. Bottom friction cannot vary from snap to snap. The other dataset types can have different values for each snap.

If the simulation is not using time steps, the datasets are chosen in the Spectral Events dialog. In this situation, a steady state dataset is chosen for each snap.