The 3D Scatter Point module is used to interpolate from groups of 3D scatter points to meshes, grids, or TINs. Several interpolation schemes are supported including inverse distance weighted interpolation and kriging.

Interpolation is useful for setting up input data for analysis codes and it is also useful for site characterization. 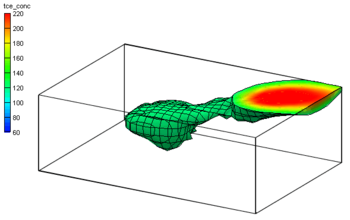 Interpolation of TCE data to a 3D grid

A number of tools are included for creating and manipulating 3D scatter point sets. In general, 3D scatter sets are imported using the File Import Wizard. 3D scatter sets can also be created from other objects in GMS such as GIS objects, feature objects, meshes, grids, TINs, etc.

Multiple 3D scatters sets can be in the module. Existing scatter sets can be duplicated or merged together.

Besides interpolating 3D scatter sets to other data, the module can also be used to create objects from the scatter data.

The module contains its own display options which include contour displays. Also, each scatter point has an active/inactive status. A scatter point with an inactive status can be displayed, but the dataset value at the point is ignored when interpolation takes place.