The T-PROGS model can be added to a paid edition of GMS.

The first step in using T-PROGS is to import a set of borehole data. The borehole data are then passed to a utility within T-PROGS called GAMEAS that computes a set of transition probability curves as a function of lag distance for each category for a given sampling interval. A sample set of measured transition probability curves are shown by the dashed lines in the following figure.

The next step in the analysis is to develop a Markov Chain model for the vertical direction that fits the observed vertical transition probability data. The Markov Chain curves are shown as solid lines in the preceeding figure. Mathematically, a Markov chain model applied to one-dimensional categorical data in a direction Φ assumes a matrix exponential form:

where h denotes a lag in the direction Φ, and RΦ denotes a transition rate matrix

with entries rjk,f representing the rate of change from category j to category k (conditional to the presence of j) per unit length in the direction Φ. The transition rates are adjusted to ensure a good fit between the Markov Chain model and the observed transition probability data.

In the final phase of setting up a transition probability analysis using T-PROGS, the modeler creates a grid, specifies the number of model instances (N), and launches the TSIM utility. The TSIM code uses the 3D Markov chain to formulate both indicator cokriging equations and an objective function for simulated annealing. It generates stochastic simulations using a combination of modified versions of the GSLIB codes SISIM and ANNEAL.

When having selected the New Simulation command to initialize a T-PROGS simulation, the T-PROGS Boreholes dialog appears. Here select to use all boreholes or only the boreholes in a particular folder.

Boreholes use materials to define both soils and HGUs. HGUs can be used to group several materials into one hydrogeologic unit. The T-PROGS Materials dialog lets choosing to use the materials in all HGUs or those from just one HGU. If Use all HGUs is selected, T-PROGS will use the HGU information on the boreholes and ignore the soil information. If Use one HGU is selected, T-PROGS will use the soil information on the boreholes for the soils that are in the selected HGU. This feature can be used to limit the portion of the boreholes that are used in the T-PROGS simulation.

Application of the transition probability approach involves the designation of a background material. The probabilistic constraints of the Markov chains make it unnecessary to quantify data for one category. Not only is it unnecessary, but it is futile to do so because values will be overwritten in order to satisfy constraints. Conceptually, the background material can be described as the material that “fills” in the remaining areas not occupied by other units. For example, in a fluvial depositional system, a floodplain unit would tend to occupy area not filled with higher-energy depositional units and would therefore be a logical choice for the background material.

One limitation for both the cases with and without boreholes is that a maximum of five materials can be used in the T-PROGS algorithm. This limitation was imposed to keep the data processing and user-interface reasonably simple. Although five materials present a limitation, borehole data can generally be easily condensed down to five or fewer materials. Furthermore since this is a stochastic approach, which is based on probability, the detail generated with numerous materials is rarely justifiable anyway. In addition, as the number of materials increase, the ratio of process time to detail becomes inefficient.

The underlying equations solved by the T-PROGS software require an orthogonal grid with constant cell dimensions (X, Y, and Z). The delta X values can be different from the delta Y and delta Z values, and the delta Y values can be different from the delta Z values, but all cells must have the same change in X, Y, and Z dimensions. The MODFLOW model is capable of using the Layer Property Flow (LPF) package with the Material ID option for assigning aquifer properties. With this option, each cell in the grid is assigned a material ID and the aquifer properties (Kh, Kv, etc.) associated with each material are automatically assigned to the layer data arrays for the LPF package when the MODFLOW files are saved. The T-PROGS software generates multiple material sets (arrays of material IDs), each of which represents a different realization of the aquifer heterogeneity. When running a MODFLOW simulation in stochastic mode, GMS automatically loads each of the N material sets generated by the T-PROGS software and saves N different sets of MODFLOW input files. The N solutions resulting from these simulations can be read into GMS and used to perform risk analyses such as probabilistic capture zone delineation. 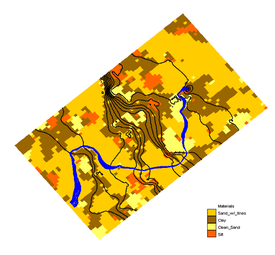 Although MODFLOW is a three-dimensional model, a majority of the MODFLOW models constructed are 2D models consisting of one model layer. There are several reasons why 2D models are so common. One reason is that many of these models are regional models where the aquifer thickness is very small compared to the lateral extent of the model. As a result, the flow directions are primarily horizontal and little improvement is gained by adding multiple layers to the model. Even with local scale models, the aquifer thickness is often small enough that one-layer models are considered adequate. 2D models are also attractive due to the simplicity of the model increased computational efficiency. One of the problems associated with using multiple layers for MODFLOW models with unconfined aquifers is that as the water table fluctuates, the upper cells may go dry. These cells will not rewet even if the water table subsequently rises, unless the rewetting option has been selected in the flow package (BCF, LPF, or HUF). The rewetting issues can often be avoided with a one-layer model.

When developing a one-layer model, the modeler must determine how to distribute the hydraulic conductivity values within the layer. One option is to assume a homogenous aquifer; this is typically a gross over-simplification since aquifers are usually highly heterogeneous. Therefore, a common approach is to delineate zones of hydraulic conductivity by examining the subsurface stratigraphic data. In many cases, these data are in the form of borehole logs. These borehole logs often exhibit substantial heterogeneity and don’t always exhibit definitive trends between adjacent boreholes. Furthermore, the boreholes are often clustered with large regions of the model lacking any borehole data. The modeler then faces a difficult task of trying to determine a rational approach to delineating two-dimensional zones of hydraulic conductivity based on complex 3D borehole data.

As part of this research, we developed a technique for developing 2D zones of hydraulic conductivity from borehole logs using transition probability geostatistics. The technique is simple, fast, and preserves proportions and trends exhibited by the borehole data. The algorithm parses through each borehole and computes a predominant material at each borehole. When T-PROGS runs, the predominant material for each borehole is assigned to its corresponding location in the one-layer grid, and during the quenching process, simulations are conditioned to those data points.

Using transition probability geostatistics with MODFLOW models results in two basic limitations. First, the underlying stochastic algorithms used by the T-PROGS software are formulated such that the MODFLOW grid must have uniform row, column, and layer widths. The row width can be different from the column width, but each row must have the same width. This results in a uniform orthogonal grid. While MODFLOW grids are orthogonal in x and y, the layer thickness is allowed to vary on a cell-by-cell basis. This makes it possible for the layer boundaries to accurately model the ground surface and the tops and bottoms of aquifer units. If a purely orthogonal grid is used, irregular internal and external layer boundaries must be simulated in a stair-step fashion either by varying material properties or by activating/inactivating cells via the IBOUND array. A second limitation is that in order to get a high level of detail in the simulated heterogeneity, the grid cell dimensions are generally kept quite small. This can result in difficulties in the vertical dimension. The large number of layers with small layer thicknesses near the top of the model generally ensures that many of the cells in this region will be at or above the computed water table elevation (for simulations involving unconfined aquifers). As a result, these cells will undergo many of the numerical instabilities and increased computational effort issues associated with cell wetting and drying.

The Hydrogeologic Unit Flow (HUF) package released with MODFLOW 2000 makes it possible to overcome both of these limitations resulting in a powerful mechanism for incorporating transition probability geostatistics in MODFLOW simulations. With the HUF package, the modeler is allowed to input the vertical component of the stratigraphy in a grid-independent fashion. The stratigraphy data are defined using a set of elevation and thickness arrays. The first array defines the top elevation of the model. The remaining arrays define the thicknesses of a series of hydrogeologic units, starting at the top and progressing to the bottom of the model. For each array of thicknesses, many of the entries in the array may be zero. This makes it possible to simulate complex heterogeneity, including pinchouts and embedded lenses that would be difficult to simulate with the LPF and BCF packages.