Many of the parameters associated with feature objects can be specified as either constant or transient values. Transient values are defined as a simple list of time/data pairs using the XY Series Editor. The time series represents a piece-wise linear curve indicating how the parameter varies with time. When the Map → MODFLOW command is selected, these curves must undergo temporal discretization. Temporal discretization is a process of converting general time series into discrete values that apply over specific time ranges (stress periods).

Because the user is free to enter any time values for the x parameter of an xy series, it is possible that the xy series as entered does not cover the same time range as the stress periods. In this case it may be necessary to extrapolate a value for the xy series at a time before or after the first or last entered value. In GMS the simplest approach has been used. If a value is required for a time previous to the times defined by the xy series, the first value is used. Likewise for a time that is later than the all of the times in the xy series, the last value is used. Since this behavior might hide an error in the input parameters, GMS will warn the user if any xy series does not cover the time range defined by the stress periods.

It is also sometimes necessary to create an xy series that is a composite of two other xy series. This is the case when obtaining transient values for an intermediate point along an arc segment that has differing transient parameters at both nodes at the ends of the arc. To perform this type of interpolation, a new xy series is constructed that is the union of the x times from the two original series. The y-values that correspond to the time step in each of the series are used to obtain a new y value for the intermediate point:

Where F is the y-value along the new xy series, y1 and y2 are the two node xy series and hn is the interpolation weighting parameter.

MODFLOW and MT3DMS both use the concept of stress periods to define the times that stresses may be applied. A stress period is a time interval during which all external stresses are constant. Because an xy series is not constrained to be constant over a time interval, it is necessary to obtain a representative value from the xy series that will approximate this condition. 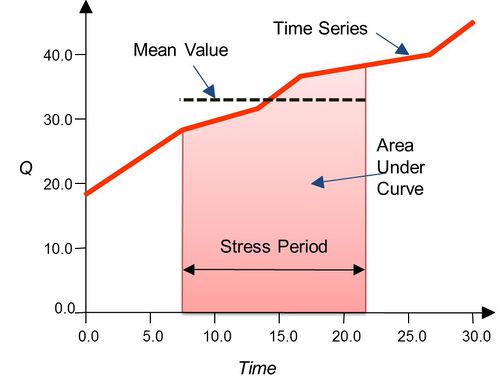