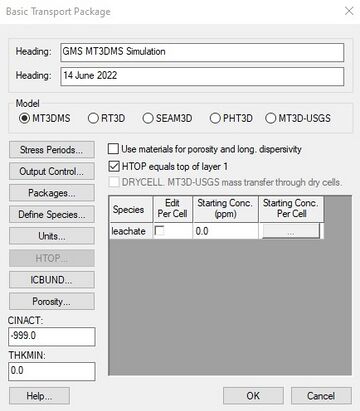 A brief description of the model can be entered in the two lines provided at the top of the Basic Transport Package dialog. This information is printed to the ASCII listing file output by MT3DMS.

The Model section in the middle of the Basic Transport Package dialog is used to select which transport model is to be used. The menu commands and packages and options that are available depend on which model is selected. All MT3DMS-based transport models are contained in the MT3DMS menu. See the RT3D, SEAM3D, PHT3D, and MT3D-USGS pages for more information on those transport models. 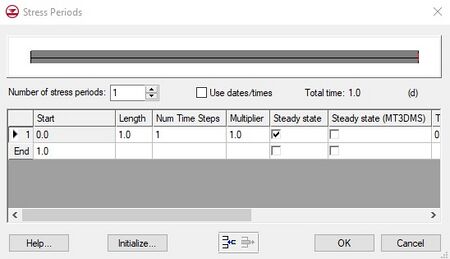 As is the case with MODFLOW, the computational time intervals for an MT3DMS simulation are called "stress periods". Concentrations at boundary conditions or source/sink terms can only change at the beginning of each stress period. Stress periods are subdivided into time steps and time steps are subdivided into transport steps. The Stress Periods button on the left of the Basic Transport Package dialog is used to bring up the Stress Period dialog. If a transient MODFLOW simulation is used, the stress periods and time steps used for MT3DMS are initialized to coincide exactly with those defined for MODFLOW. If a steady state MODFLOW simulation is used, any set of stress periods may be utilized for MT3DMS. 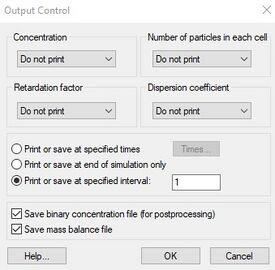 One of the output options is an unformatted (binary) concentration file which is used for post-processing by GMS. This option is selected using the toggle at the bottom of the dialog. With the version of MT3DMS included with GMS, the concentration file is saved directly from MT3DMS as a GMS binary scalar dataset file.

Another option is to Print or save at specified times. When this option is selected, the Times button is undimmed. Selecting the Times button brings up a spreadsheet that enables specifying the times that the output will be printed or saved. The spreadsheet can be quickly initialized by selecting the Initialize Values button at the bottom of the dialog. This button brings up the Initialize Time Steps dialog. This dialog is composed of edit fields that will automatically populate the times that MT3DMS data will be saved or printed. 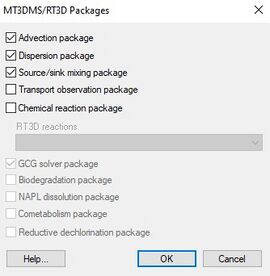 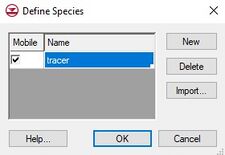 MT3DMS is a multi-species transport model. It can track the migration and concentration of several species at once. The Define Species button is used to define the number of species in the simulation and the name and type of each species. The button brings up the Define Species dialog.

The species are listed in the box on the left side of the dialog. Species are added and deleted using the New and Delete buttons. The name of a selected species can be edited. The Mobile toggle is used for RT3D and is dimmed for MT3DMS simulations.

All MT3DMS input parameters must be entered using a consistent set of units. The Units button brings up a dialog which can be used to specify a standard unit for length, time, mass, force, and concentration. The selected units are used by GMS to post the appropriate unit labels next to each of the input fields in the MT3DMS interface. These labels serve as a reminder of the correct units. The units must be consistent with the units used in the MODFLOW simulation.

The CINACT value is written to the MT3DMS solution file wherever an inactive concentration cell exists (ICBUND=0). This value should be selected so that it will not likely be a valid concentration computed from MT3DMS. The default value of -999 is generally sufficient.

Use Materials for Porosity and Long. Dispersivity

If this option is selected, the porosities and longitudinal dispersivities specified in the Materials dialog will be used in the MT3DMS model.

Another option would be to use the default approach and lower the value of the layer 1 top elevation array. For unconfined layers, this array is not used by MODFLOW anyway. The only reason to keep the HTOP array separate from the top elevation array is for visualization. When a MODFLOW solution is displayed in side view, GMS plots the computed water table on top of the cross section display. Using the top elevation of layer 1 as the ground surface makes it possible to see exactly where the water table lies in relation to the ground surface and illustrates where cells are flooded. 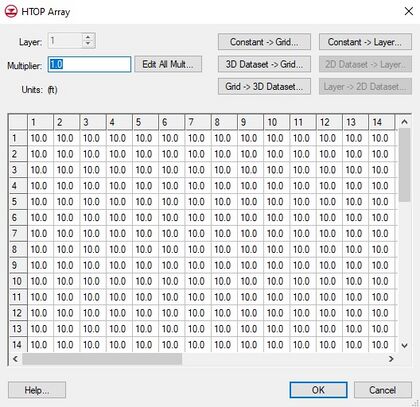 The DRYCELL check box enables mass transfer through dry cells from MODFLOW-NWT models. This feature is available in MT3D-USGS.

Part of the input to the Basic Transport package is a set of arrays defining the layer geometry. These arrays include an HTOP array that defines the top elevations for the top layer and a thickness array for each layer. Since MT3DMS can only be used in combination with the True Layer approach in MODFLOW, there is no need to input these arrays in the MT3DMS interface. By default, the HTOP array is assumed to be equal to the top elevation array for layer 1 defined in the Global Options package of MODFLOW. Furthermore, the thickness arrays are automatically generated by GMS using the top and bottom elevation arrays when the Basic Transport package file is written.

The ICBUND button in the Basic Transport Package dialog is used to enter the values of the ICBUND array.

The array defining the porosity of each cell in the model can be defined and edited by selecting the Porosity button in the Basic Transport Package. This array can also be initialized using a conceptual model in the Map module. It can also be edited on a cell-by-cell basis using the Cell Properties command. 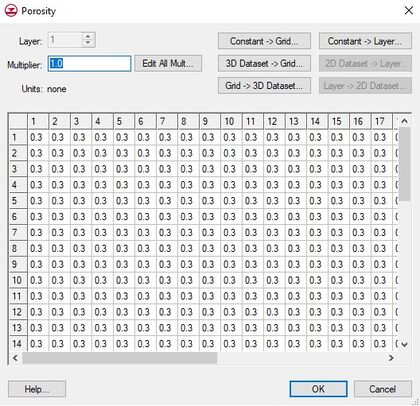