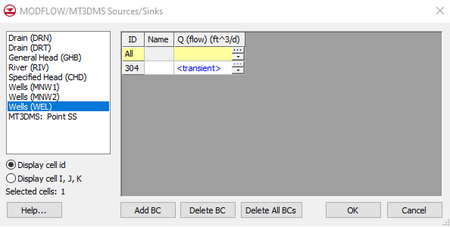 The Source/Sink Mixing Package dialog can be used to edit both point and areal sources/sinks using a spreadsheet. In many cases, it is more convenient to view and edit source sink concentrations on a cell-by-cell basis. Two commands are provided to facilitate this type of editing: the Point Sources/Sinks command and the Areal Sources/Sinks command.

The areal source/sink concentration values at the selected cells can be edited by highlighting a species and either selecting a constant value for all stress periods, or by defining a set of values.