DEMs (digital elevation models), and images that include elevation data such as a GeoTIFF, are referred to as "rasters". GMS supports a large number of DEM formats. After importing, DEMs are listed under "

GIS Layers" in the Project Explorer along with other images. The raster icon

is different from the image icon

to indicate it includes elevation data. The values at the pixels can represent a wide variety of data, including (but not limited to) concentrations, elevations, or flow rates.

Rasters can be created from within GMS by interpolating from 2D scatter points. The interpolation options, the raster cell size, and the extents of the raster can all be specified in the Scatter → Raster dialog.

Rasters can be interpolated to most other objects, including the z values of feature objects and to MODFLOW layers. The interpolation is done by finding the raster cells that the object's points are in and assigning to the points the values from the raster cells.

Multiple rasters can be interpolated to another object at once by simply selecting multiple rasters in the Project Explorer, right-clicking and selecting the appropriate interpolation command. This will result in the creation of multiple datasets on the object being interpolated to. If the user desires to create only one dataset from all the rasters (because they are tiled next to each other, for example), the user can create a raster catalog and interpolate from it.

Rasters can be converted to the following: 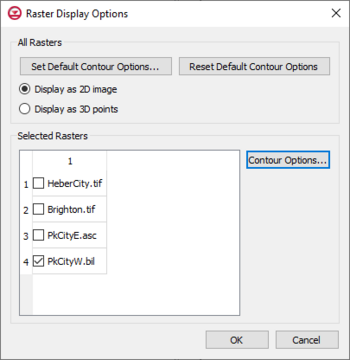 DEMs are imported and displayed as either 2D images or as a 3D point cloud.

The Raster Display Options dialog has the following options:

With either 2D or 3D, four different shaders, which control the color ramp, are available. A color legend can be displayed to relate colors with values.

Most raster data has a projection and coordinates (X, Y, and possibly Z locations of each raster cell) associated with it. The projection contains information about how to map the coordinates in the raster to actual horizontal and vertical locations on the surface of the earth.

When loading an image or a raster, GMS, SMS, or WMS (referred to collectively as XMS) determines the horizontal projection using GDAL. This will be based on either a projection file (*.prj) or internal projection information in the raster.

If vertical projection information (vertical datum and units) is available for the image or raster, XMS reads the information and stores it internally.

If changing any projection information for a raster loaded into the a project, the XMS software saves a new raster in GeoTiff format.

Occasionally, a raster will exist that does not contain elevation data (for example, concentration values). In this case, XMS stores a metadata flag (read only by GMS, SMS, and WMS) with the raster stating that the raster does not have elevation units. When this metadata flag is found by XMS, none of the vertical values are reprojected after reading the raster.

XMS uses GeoTiffs to export rasters with horizontal and vertical projection information for use in other GIS programs.

Saving Projection Information with a Raster