From XMS Wiki
(Redirected from GMS:Source/Sink Mixing Package)
Jump to navigationJump to search 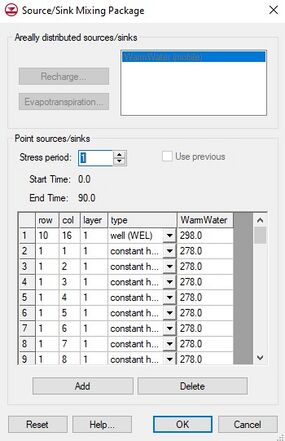 The information below describes the dialog.

MT3DMS needs to know the maximum number of sources/sinks in the flow model. This number is simply the total number of cells in the MODFLOW model that have a source or sink defined at them. This number is computed automatically.

A column is provided for each of the species concentrations. Changing the source/sink type for one stress period at a cell will automatically change the type for the remainder of the stress periods at the same cell.

Point sources/sinks can be added and removed from the list by selecting the Add and Delete buttons. However, when adding new point source/sink, it is usually more convenient to select the 3D grid cells and use the MT3DMS | Point Sources/Sinks menu command.

The Reset button deletes all of the data currently defined in the Source/Sink Mixing package and restores the package parameters to the default values.

In some cases, the simplest way to define both point and areal sources/sinks is with an MT3DMS conceptual model in the Map module. Concentrations can be assigned directly to points, arcs, and polygons; points representing point sources/sinks and polygons representing recharge and evapotranspiration zones. These concentrations are copied directly to the appropriate cells/arrays in the Source/Sink Mixing package when the conceptual model is converted to the numerical model with the Feature Objects | Map → MT3DMS command.