tool is used to get data from the web or from a catalog file.

Common problems when beginning a project in WMS include the need to locate the necessary data (e.g. DEMs, Topo Map images, shape files of land use and soils, etc.), make sure the file format is correct, open in WMS, and then ensure that all of the data are in a common coordinate system. This can be tedious, especially if many users of the same organization frequently use the same data and therefore repeat this process over and over again on the same set of files. For agencies like flood control districts, departments of transportation, counties, etc. that manage large data for a community of users it is convenient to catalog the necessary files. WMS can read a database catalog and then automatically open any files that fit within a user specified bounding box.

Using the Get Data Tool

tool can be used to select a geographic area of interest for a modeling project. Available files, as defined by a data catalog file, within the bounding box are opened for use within WMS. The following steps are followed when opening data with the Get Data tool: 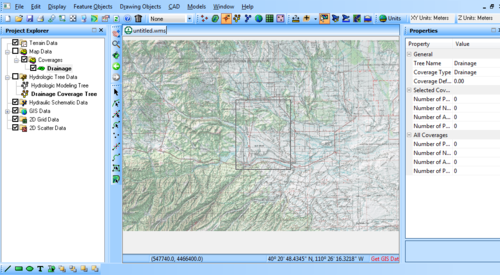 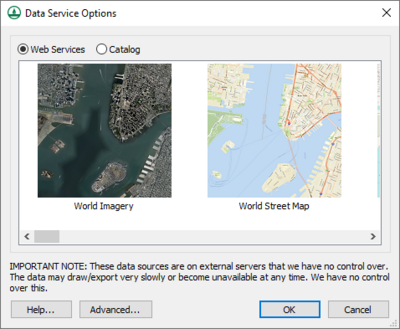 The data files whose extents overlap the defined rectangle will then be opened and loaded into WMS. 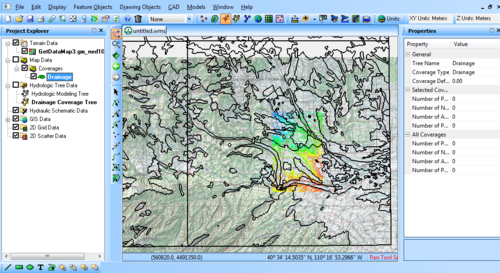 In order for the Get Data tool to work a text file defining the location and extents of each file must be created first and then the data files (DEMs, Images, etc.) archived in a directory or CD/DVD so that it can be accessible to those who will use it. The following shows a small example of what this text file should look like:

A catalog file is a simple space/comma/tab delimited text file. For each kind of data defined in the file there should be a two-part identifier. The first part of the identifier specifies the file type and the current valid types are:

The bounding-box coordinates for all files must then be given in four separate fields as defined by the header line.

In order to make the catalog easily accessible a georeferenced base map is useful. Such a map need not (and probably it is best if it does not) contain a lot of detail, but rather enough information that a modeler can get a general sense of where a potential modeling area lies.