Output for several of the hydrologic models includes a hydrograph. WMS allows hydrographs to be displayed and compared. Multiple hydrographs can be read in and viewed, listed, and exported. Plot options allow control over the way hydrographs are displayed.

A hydrograph can be computed from any of the supported hydrologic models. A hydrograph can also be defined/imported using the New command in the Hydrograph menu. This option allows users to copy a hydrograph from the clipboard, or open a text file using the File Import Wizard and define it for a selected basin or outlet node.

The hydrograph should be selected prior to bringing up the detention basin calculator.

The Open Hydrograph Plot command brings up a Plot Window for the selected hydrograph(s). If wanting to view more than one hydrograph, select multiple hydrograph icons from the graphics window before choosing this command. It is also possible to bring up a new hydrograph window by double-clicking on the hydrograph icon.

The display settings of a hydrograph window, like all plot windows in WMS, are controlled by right-clicking in the Plot Window and choosing from the available drop down menu commands.

If multiple storms or multiple ratios of a given storm are analyzed in the same run of HEC-1, then multiple hydrographs for each basin and outlet point will computed. If multiple storms have been defined using the JD card, the index numbers of hydrographs to be read must be specified. All indices or particular numbers can be specified. If multiple ratios of the same storm exist (defined on JR records), all ratios will be read. The display of a given ratio is controlled from within the Hydrologic Modeling tab in the Display Options dialog. Currently multi-plan storm hydrographs are not read.

Each storm index becomes a separate hydrograph set. Hydrograph sets are named by appending the index number to the file from which it is read. While it may be convenient to read all indices each time, it may produce an overwhelming number of hydrographs and make the display too cluttered for comparisons.

It is often useful to read a hydrograph not computed by HEC-1, or one of the other hydrologic models for calibrating purposes. This can be done by creating a hydrograph file using the WMS file format, but an easier method is to use the New command in the Hydrograph menu (or by right-clicking on a basin or outlet station from the Project Explorer) to either open a spreadsheet text file, or paste a copied hydrograph from a spreadsheet program using the File Import Wizard. The basin or outlet where defining the hydrograph (i.e. the point where wanting to compare a computed hydrograph with the measured hydrograph) should be selected prior to using this command. 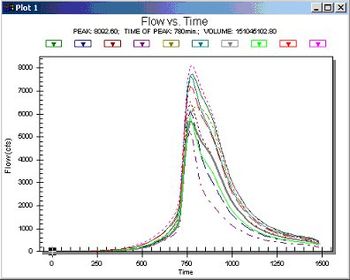 An example of a plot window.

Hydrographs can be read into WMS and displayed in icon form at the appropriate basin or outlet.

For a TR-20 analysis the GRAPHICS file, which stores discharge hydrographs, can be read into WMS. This options is only available when running the version of TR-20 distributed with WMS. This file is specified as part of the "all other files" prefix when running TR-20 from within WMS, and always has the three letter extension of THY.

For the NSS and rational analysis programs hydrographs can be computed from dimensionless unit hydrographs applied to the computed peak discharges. These hydrographs are automatically stored and displayed.

A hydrograph can also be imported from a text file or copied from the clipboard for a basin or outlet and then used to calibrate computed hydrographs or used as input to the detention basin calculator.

A series of standard comparison plots can be generated using the Plot Wizard command in the Display menu. 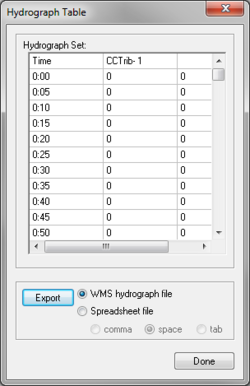 Hydrograph in a tabular format

All hydrographs read into WMS can be deleted simultaneously using the Delete All command in the Hydrographs menu. The Delete Previous command can be used to remove the most recent set. Deleting the previous hydrograph set when it is no longer needed for display and comparison eliminates the confusion created by displaying too many hydrographs in the Hydrograph Window.

Sometimes it is useful to create a new hydrograph, not computed by one of the WMS models, for calibration or further analysis. This can be done using the New command in the Hydrograph menu after selecting the basin/outlet where wanting to associate the new hydrograph. When selecting this command, choose to import an existing text file or paste from the Windows clipboard a hydrograph that has previously been cut/copied from a spreadsheet or text file. In either case the data will be processed using the File Import Wizard and a new hydrograph created for the selected basin/outlet.

The text file or copied data should include a column for time and a column for flow. A couple of limitations associated with creating a new hydrograph in this fashion are that the times must be in minutes and the time step must be constant. After copying from the clipboard, or opening the text file the data will be placed in the File Import Wizard and header rows can be idnetified, starting row set, and the columns mapped to their respective data fields.

Selected hydrograph(s) may be exported to either the native WMS file format or to a space, comma, or tab delimited text file that can be read into a spreadsheet program like Microsoft Excel.