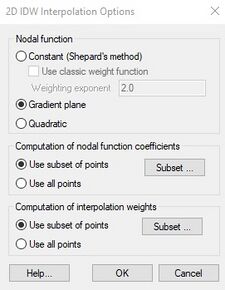 The simplest form of inverse distance weighted interpolation is sometimes called "Shepard's method" (Shepard 1968). The equation used is as follows:

where p is an arbitrary positive real number called the power parameter (typically, p=2) and hi is the distance from the scatter point to the interpolation point or

3D Interpolation The 3D equations for Shepard's method are identical to the 2D equations except that the distances are computed using:

A limitation of Shepard's method is that the interpolating surface is a simple weighted average of the data values of the scatter points and is constrained to lie between the extreme values in the dataset. In other words, the surface does not infer local maxima or minima implicit in the dataset. This problem can be overcome by generalizing the basic form of the equation for Shepard's method in the following manner:

The nodal functions used in inverse distance weighted interpolation can be higher degree polynomial functions constrained to pass through the scatter point and approximate the nearby points in a least squares manner. Quadratic polynomials have been found to work well in many cases (Franke & Nielson 1980; Franke 1982). The resulting surface reproduces local variations implicit in the dataset, is smooth, and approximates the quadratic nodal functions near the scatter points. The equation used for the quadratic nodal function centered at point k is as follows:

To define the function, the six coefficients ak1..ak6 must be found. Since the function is centered at the point k and passes through point k, we know beforehand that ak1=fk where fk is the function value at point k. The equation simplifies to:

For 3D interpolation, the equation for the quadratic nodal function is:

To define the function, the ten coefficients ak1..ak10 must be found. Since the function is centered on point k, we know that ak1=fk where fk is the data value at point k. The equation simplifies to:

Now there are only nine unknown coefficients. The coefficients are found by fitting the quadratic to a subset of the neighboring scatter points in a weighted least squares fashion. In order for the matrix equation used to be solve for the coefficients to be stable, there should be at least ten non-coplanar scatter point in the set.