From XMS Wiki
(Redirected from GMS:Static Tools)
Jump to navigationJump to search 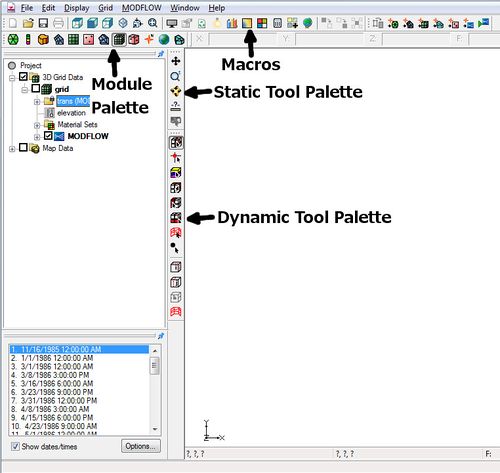 Some of the more frequently used menu commands can be accessed through the macro buttons.

The following File menu commands appear as macros on this toolbar:

The following Display menu commands appear as macros in this toolbar. They can also be accessed by selecting either Display or Display | View and selecting the desired tool.

The following Display and Edit menu commands appear as macros in this toolbar. They can also be accessed by selecting either Display or Edit and selecting the desired tool.

The following Display menu commands appear as macros in this toolbar. They can also be accessed by selecting Display | Visibility and selecting the desired tool.

These macros appear or disappear according to which options and models are enabled or disabled.

Includes commands for building polygons, running models, and for the mapping feature objects to geometric objects or numerical models. The available macros will change depending on the available data and project setup.

The Static Tools contain the tools which are available in every module. These tools are for basic operations such as panning and zooming. Only one tool is active at any given time. The action that takes place when clicking in the Graphics Window depends on the current tool. The following table describes the tools in the Static Tools.

When the active module is changed, the tools in the Dynamic Tools change to the set of tools associated with the selected object/module.

The Mini-Grid Toolbar appears when a 3D grid exists and when the orthogonal viewing mode is active. In the orthogonal mode, the viewing angle is always parallel to one of the three grid axes (I, J, or K) and only one of the rows, columns, or layers is displayed at one time. The Mini-Grid Toolbar shows an idealized representation of the 3D grid and shows which of the rows, columns, or layers is currently being displayed. The current row, column, or layer can be changed using the arrows

on the Mini-Grid Toolbar.

The Modules toolbar is used to switch between modules. Only one module is active at any given time. Activating a module simply changes the set of available tools and menu commands.