In order for gage information to be used during the simulation, the basin precipitation type must be set to gage in the Precipitation dialog.

One of the most important steps in any modeling problem is calibration. During the calibration phase, an attempt is made to model a set of conditions which have been known to exist at a site and for which measured data (surface depth, infiltration) are available. The geometry, resolution, and input parameters of the model are adjusted until the output computed by the model is reasonably close to the measured data.

The calibration stage can be the most tedious and time-consuming portion of the modeling process. In order to make the calibration stage more efficient, a set of tools for managing gages has been provided in WMS. A "gage" is an xyz point representing a location where field data has been collected (e.g., a gaging station) or simply a point of interest in the model. Once a set of gages has been defined, whenever a transient dataset is imported to WMS to a grid, the dataset is interpolated to each gage and a curve is drawn in the Hydrograph window representing the variation of the dataset with time at each gage. The plot can be customized to include any combination of gages and datasets. Field data can be imported from text files and plotted for comparison with computed curves.

Gages and gage plots are supported only in the 2D Grid module.

If a terrain model is being used then the X and Y position in a consistent coordinate frame need to be entered in the appropriate edit fields. Once there are three or more defined gages, the Thiessen polygon network can be displayed. If a terrain model is not being used then the weights must be assigned manually and the position information is not important. In this case the Define rain gage location toggle should be turned off.

Gages can also be created and deleted using the Gage tools. The gage tools appear in the dynamic portion of the Tool Palette of each of the modules which support gages. The tools are as follows:

Select Gages Tool
The Select Gages tool is used to select previously defined gages. A set of selected gages can be deleted by hitting the DELETE key or by selecting the Delete command from the Edit menu. The coordinates of a selected gage can be edited using the Edit Window. The location of a gage can also be edited by holding down the mouse button when a gage is selected and dragging the gage. This tool is also used to control what is plotted in the Gage Plot Window. Only the curves associated with selected gages are plotted.

Once a set of gages has been defined, a plot can be generated in a Hydrograph Window representing the variation vs. time of any of the transient datasets associated with grids interpolated to the gages. The curves are plotted only for gages which have been selected using the Select Gages tool. This makes it possible to quickly change the combination of curves plotted. 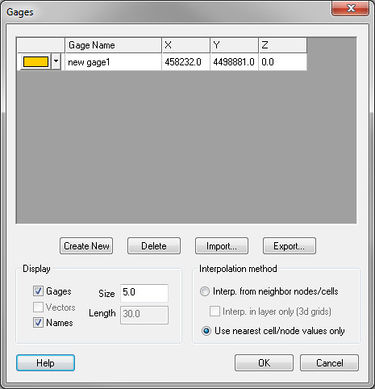 A set of gages can be created by selecting the Gages command from the Data menu. This command activates the Gages dialog. All existing gages are listed in the text box in the upper left corner of the dialog. One of these gages is highlighted at all times. The name, color, and location of the highlighted gage can be edited using the controls on the right hand portion of the dialog. The color and name are used in displaying the gage in the Graphics Window.

Gages are plotted in the Graphics Window as shown below. The name is plotted just below the gage symbol. Each component of the gage can be turned on or off or resized using the Display items in the lower left corner of the Gages dialog. 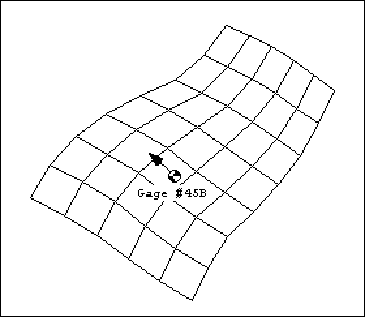