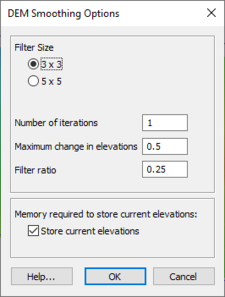 In order to conserve the amount of disk spaced required to store a DEM, many DEM formats store elevations rounded to the nearest integer value. This causes elevation changes to occur in discrete steps rather than smoothly, as would be the case in nature. In regions of low relief, rounded elevations can cause an area to be artificially "flat." Because so many DEMs are stored in this fashion the default in WMS when importing a DEM is to automatically smooth according to the default Smoothing Options. This option can be turned off in the DEM Import dialog if not wanting WMS to smooth automatically. Once read in the DEM can be smoothed using the Smooth command from the DEM menu.

Different smoothing options can be set to specify how the smoothing process operates. A description of the different options follows.

When a DEM is a smoothed an N x N filter matrix is placed over each elevation point and a new elevation is computed by taking an inverse-distance weighted average of all elevations within the filter (The weight assigned to the central cell is determined from the filter ratio). The dimension of N can be specified as either 3 or 5, meaning that new elevations are computed from either the nearest 8 or 24 neighboring points. When computing new elevations for points near the boundary, the number of neighboring points is modified to include only those portions of the filter which overlap the DEM.

A maximum change in elevation can be specified to ensure that the integrity of the original DEM elevations is maintained. For example, if DEM elevations are rounded to the nearest meter, then smoothing should not adjust the elevation by more than plus or minus one half meter. This value can be increased, but care should be used in doing so in order to keep from "over smoothing" the original data.

The filter ratio should be between 0-1, and is used to specify the weight of the central cell of the filtering matrix. It can be used to establish how much effect the DEM point itself has on a newly computed elevation, and how much effect the neighboring cells have. For example, if the filter ratio is set to .75, then 75% of the newly computed elevation will be based on the point itself and 25% will be based on the neighboring elevation points.