The Feature Objects menu has the following commands:

The Delete command will delete all feature objects and any unsaved data. See the coverages listing to read more about the kinds of attributes that feature objects have for each coverage type.

The Vertex ↔ Node command in the Feature Objects menu can be used to create a node from a vertex or a vertex from a node (providing the node is connected to only two arcs). Vertices only define the geometry of the arc whereas nodes define the beginning and ending of an arc. Therefore when converting a vertex to a node the arc to which the vertex belongs is split into two separate arcs at the selected vertex. Likewise, when a node is converted to a vertex the two arcs attached to the node are merged into a single arc (if more than two arcs are attached to a node it cannot be converted to a vertex).

When converting a vertex to a drainage outlet for a DEM the vertex is automatically converted to a node first and then the attribute type is set to drainage outlet. The Clean command in the Feature Objects menu is used to clean up feature object data. Specifically, it prompts for a snapping tolerance and minimum dangling arc length, and then uses these parameters to do the following:

All objects of the active coverage will be cleaned.

Just defining a series of arcs that form a closed loop, or polygon, does not create a polygon. Polygons are created from arcs only after the Build Polygons command in the Feature Objects menu is used. Feature polygons can be created in one of two ways:

By either method, the new polygon inherits the current default polygon type, unless in the drainage cover and then the new polygon will be defaulted to a lake polygon if all it's arcs are lake arcs and a drainage polygon otherwise. 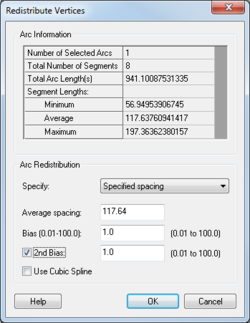 Vertices along arcs can be redistributed at either a higher or lower density using the Redistribute command in the Feature Objects menu. The vertex density along arcs determines the density of TIN vertices when issuing the Create TIN command from the Feature Objects menu. Vertices are redistributed along all selected arcs using a uniform or cubic spline method. Arcs can be selected one at a time using the Select Arc tool, the Select All command in the Edit menu (the Select Arc tool must be active), the Select Branch tool, or the Select Network tool. Once the arcs are selected the method of redistribution can be chosen from the Redistribute dialog.

If the Subdivide each end uniformly options is specified then either a number of intervals, or a specified spacing can be given to determine how points are redistributed along the selected arcs. If the specified spacing is greater than the length between adjacent arc vertices, the vertices are moved to reflect this larger spacing.

If the Redistribute along a cubic spline option is specified vertices between arcs are redistributed by creating a series of splines from the vertices of selected arcs and then redistributing a new set of vertices at the specified distance. If the flag for preserving points with an angle greater than the specified angle is checked then vertices at such locations will remain after the redistribution. This method can be used to create vertices at a smaller density (specify a larger target spacing) as well as a higher density.

See the article Creating TINs for more information on this command. A grid can be created from a feature polygon using the Create Grid command in the Feature Objects menu when using the Map Module or selecting Create Grid from the Grids menu when the 2-D Grid Module. Either command will bring up the Create Grid dialog. Active and inactive cells are determined from the boundary polygon. A rectangular grid is created that encompasses the bounds of the boundary polygon and cells outside the polygon are assigned an inactive status. Either an existing TIN or a DEM can be used as a background elevation map when interpolating z values for the elevation dataset of the grid. 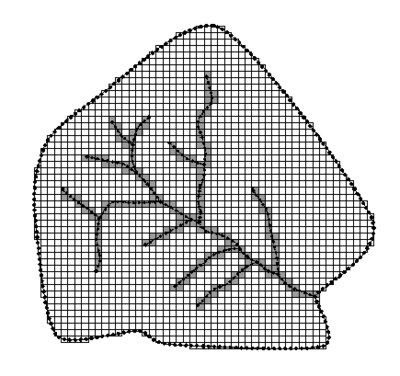 The Reorder Streams command in the Feature Objects menu is used to ensure that the direction of all stream arcs are consistently defined from a selected outlet node. When creating stream arcs in WMS a check is made to ensure that points are created from downstream to upstream, so that the first node in the arc is the downstream node. This makes it impossible to create streams in WMS that do not follow this definition. However, when arcs are imported it is possible to create streams where the downstream node is second rather than first for some arcs but not others. All arcs can be consistently ordered by selecting an outlet node (a node attached to only one arc) and then choosing the Reorder Streams command.

The Node → Flow Arcs command requires the "Time Computation" coverage have been created and a DEM dataset must have been loaded into WMS.

The Stream → Flow Arcs command requires the "Time Computation" coverage have been created.

After defining basin boundaries, attributes such as basin areas, slopes, and stream lengths can be computed using the Compute Basin Data command. These attributes are all geometric parameters used in defining basins and routing networks in HEC-1, TR-20, and other hydrologic models. If the basins are changed in any way, the drainage data must be recomputed using this command. When computing basin data the model units and the parameter units must be specified. The only choices available for model units are feet and meters whereas the parameter for area include square miles, square kilometers, and acres, and for distance include mile, kilometer, feet, and meters. A complete definition of the different geometric attributes computed and how they may be used to compute travel times (lag time, time of concentration) is given in the Hydrologic/Hydraulic Calculations page.

The Compute Basin Data command brings up a Units dialog.

This command will open the Compute Gage Weight dialog where the cell size for weight computation can be entered. Gages must exist in the Hydrologic module before this command is available. See Gages.