A coverage is similar to a layer in a CAD drawing. Each coverage represents a particular set of information. For example, one coverage could be used to define recharge zones and another coverage could be used to define zones of hydraulic conductivity. These objects could not be included in a single coverage since polygons within a coverage are not allowed to overlap and recharge zones will typically overlap hydraulic conductivity zones.

and bold text. Inactive coverages will have a grayed out icon

A new coverage can be created by right-clicking on a folder or conceptual model and selecting the New Coverage command in the pop-up menu. 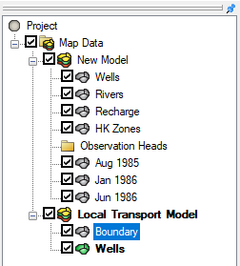 Example of the tree map in the Project Explorer

Right-clicking on a coverage brings up a menu with the following options: 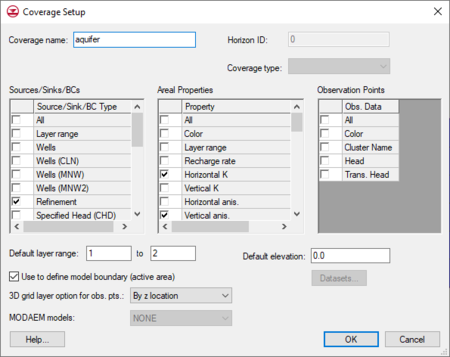 Example of the Coverage Setup dialog

The Coverage Setup command brings up the Coverage Setup dialog. This dialog controls the properties that are assigned to feature objects. The feature object properties have been divided into 3 general categories: Sources/Sinks/BCs, Areal Properties, and Observation Points. Under the Sources/Sinks/BCs the user can select which source/sinks he would like to include in the coverage (like wells, rivers, drains, etc). Areal Properties includes recharge, ET, hydraulic conductivity, and other properties that are assigned to polygonal zones. Observation Points control which datasets have associated observation data.

The Coverage type is used for WASH123D conceptual models to set the coverage to be a 3D or a 2D coverage.

The Default layer range is used with MODFLOW conceptual models to default the "from layer"/"to layer" assignments for boundary conditions.

The Use to define model boundary toggle is used with MODFLOW and MODAEM. This means that the polygons in this coverage are used to define the active area of the model. For no flow boundary cells a majority of the cell has to be within a polygon for it to be active. For specified head cells if any portion of the cell is inside a boundary polygon then it is activated.

The Default elevation field can be used to define the initial Z elevation of new objects created in a coverage. By assigning a different elevation to each of the coverages, the coverages can be displayed as a stack of layers in oblique view.

All feature object properties are edited using a single spreadsheet. This makes it possible to cut and paste feature object data using the clipboard and it makes it easier to edit entire columns of data at once. Filters at the top of the dialog control what type of objects are displayed.

The specific attributes available in this dialog vary depending on options selected in the Coverage Setup dialog. 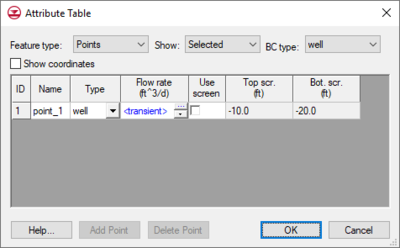 Coverages can be mapped to other geometric objects or numerical models by selecting the corresponding command from the Map to submenu. Options include:

Right-click on a coverage and selecting the Properties command will open a Properties dialog. This dialog will contain information about the coverage, such as the number of feature objects and projection. The dialog also contains a Notes tab for saving comments or other notes about the coverage.