In the original version of MODFLOW, specified head boundaries are defined using a combination of the IBOUND array and the starting heads array. Since both of these arrays are static, boundaries where the head varies with time could not be simulated. To address this type of boundary, a new package called the Time Variant Specified Head (CHD) package has been developed. The Constant Head Designation (CHD) reads data every stress period, which makes changing the head at constant-head cells (designated with a negative IBOUND value) throughout a simulation possible. 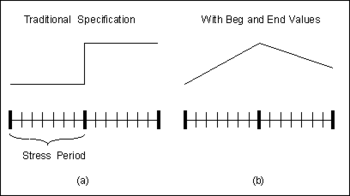 Specifying Transient Values Using (a) the Traditional Approach and (b) the Approach Used in the CHD Package. 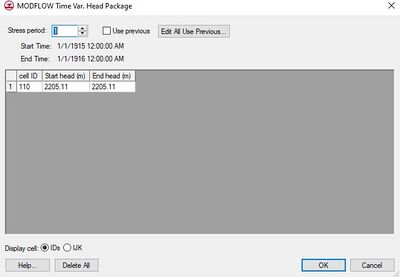 A time variant specified head boundary can be defined using a conceptual model in the Map module simply by using the Transient option when entering the head value in the Attributes dialog. When the specified head attribute is assigned to a polygon, the head is assigned uniformly over the entire polygon. When assigned to an arc, separate head values are applied to each of the nodes on the ends of the arc and the head is assumed to vary linearly between the nodes. When the attribute is assigned to a point, the head is assigned directly to the cell containing the point. For cell-by-cell editing, a selected set of cells can be designated as time variant specified head cells using the Point Sources/Sinks command described above. When the head vs. time values are entered using the XY Series Editor, two values (beginning and ending values) must be entered per stress period. Once a set of cells has been specified, the Time Variant Specified Head Package dialog can be used to view and edit the values assigned to the cells.

Edit All Use Previous

This button brings up a spreadsheet allowing the user to quickly edit the Use Previous flag for all stress periods.

This button deletes all values in the dialog.