The Connected Linear Network (CLN) process was developed for MODFLOW-USG to model one dimensional connected features that are much smaller than a groundwater flow model's cells.[1] The CLN Process can be used to replace multi-cell wells that would use the MNW1 or MNW2 package in other versions of MODFLOW.

A CLN well can be added to a conceptual model by creating a point using the "Wells (CLN)" type. The geometry of the well screen can be set using the Use screen attribute for a single vertical screen. Otherwise, the generated well nodes include the grid layers specified for the coverage by its default layer range. For transient models, the CLN well node IBOUND values are disabled until the first stress period with a non-zero flow rate.

The CLN process values can be edited in the CLN Process dialog reached through the MODLFOW | Optional Packages | CLN – Connected Linear Network menu command. The dialog contains tables that can be accessed by selecting a table from the list at the left of the dialog.

A detailed description of CLN process input is available with the MODFLOW-USG documentation available at the USGS MODFLOW-USG website. 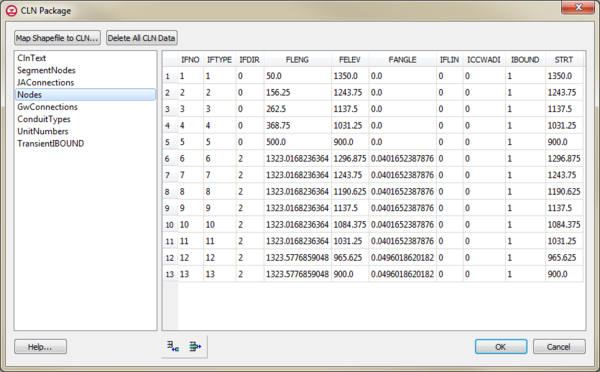 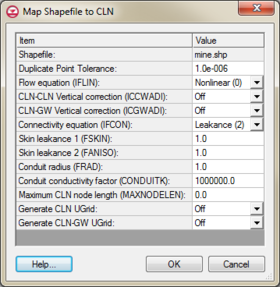 The Map Shapefile to CLN dialog

The Connected Linear Network (CLN) process was developed for MODFLOW-USG to have the ability to model complex one-dimensional connected features that are much smaller than a groundwater flow model’s cells. A three-dimensional arc shapefile can be used to store the geometry and attributes of such a linear network. Attributes can optionally be applied to the arcs of the shapefile.

Clicking the Map Shapefile to CLN button in the CLN Process dialog will first bring up a Select Arc Shapefile dialog. Once a shapefile has been selected, the Map Shapefile to CLN dialog will appear. The settings items in this dialog are used when attributes are not specified as arc attributes by the shapefile. The settings dialog includes some additional items. Arc points within the Duplicate Point Tolerance are snapped together and their CLN nodes are connected. By default, mapping a shapefile to CLN deletes the existing CLN data. When Append to existing CLN data is turned on the generated CLN data is appended to the existing data which can be useful when using CLN wells. With the final two settings, Generate CLN UGrid and Generate CLN-GW UGrid, UGrids are generated which can be visualized in GMS for the generated CLN network and also the part of the CLN network that is connected to the groundwater model.

The MODFLOW CLN Wells Package is similar to the WEL Package dialog. It is reached through the MODFLOW | Optional Packages | CLN Wel – CLN Well menu command. It allows CLN well flow rates to be viewed and edited, and CLN wells can also be deleted. The Cell ID table column is the CLN Process node ID of the well. 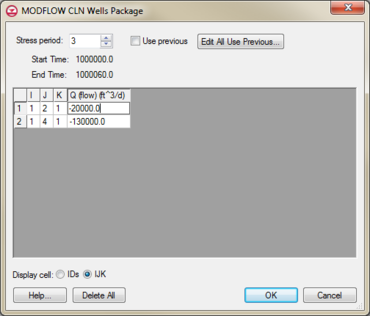