The Horizontal Flow Barrier (HFB) package is used to simulate the effect of sheet pile walls, slurry trenches, or other objects which act as a barrier (or partial barrier) to horizontal flow. Barriers are simulated in the HFB package by identifying cell boundaries which approximately coincide with the location of the barrier and assigning a hydraulic characteristic to each cell boundary. Each cell boundary represents a vertical face between two adjacent cells as shown in the following figure. 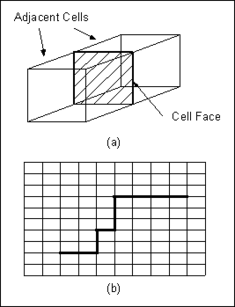 In most cases, the simplest method is to create one or more Horizontal Flow Barrier arcs in the Map module corresponding to the barriers and let GMS automatically find the closest sequence of cell boundaries and mark them as barriers.

Horizontal flow barriers can also be defined one at a time by selecting two adjacent cells and selecting the MODFLOW | Advanced| Toggle Barrier menu command. This brings up a dialog that can be used to mark the boundary between the two selected cells as a barrier and to enter a hydraulic characteristic for the barrier. This same command can be used to delete a barrier between two cells. 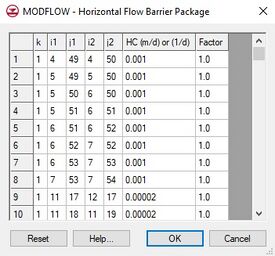 Regardless of which method is used to define the barriers, an existing set of barriers can be viewed and edited using the HFB Package command in the MODFLOW menu. This command brings up the MODFLOW – Horizontal Flow Barrier Package dialog. This dialog can be used to edit the location and hydraulic characteristic of each of the currently defined barriers.

For cells where horizontal flow barriers have been assigned, the hydraulic characteristic assigned to each cell is displayed in the spreadsheet portion at the lower part of the dialog.

The Reset button can be used to delete all barriers.