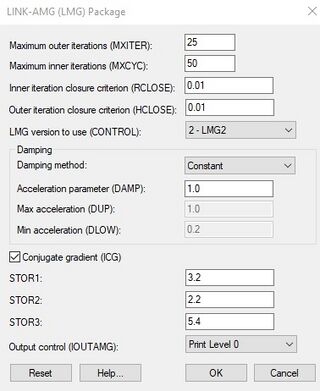 The MODFLOW Link-AMG (Algebraic Multi-Grid), or LMG (Link Multi-Grid), package solver is an interface linking the SAMG (Systems Algebraic Multi-Grid) library to MODFLOW. The LMG3 package offers some improvements over the LMG1 package for certain types of problems, and is backward compatible with LMG1 input files. For non-linear problems and simulations which use several time steps, subsequent matrices to be solved for often change only slightly in their algebraic properties. In these cases the LMG3 solver can accelerate the overall simulation run enormously. Using SAMG the user can run a specific GMS MODFLOW executable (mf2k5_..._parallel.exe) with parallel processing on a single machine (though not across multiple machines on a network).

The LMG1 package is only supported in GMS versions prior to 8.0.

MXCYC. Maximum inner iterations
This value is the maximum number of iterations per call to the solver. The default value is 50, and this is sufficient for most problems.

RCLOSE. Inner iteration closure criterion
Same as RCLOSE for the GMG solver package. The PCG algorithm computes the l2norm of the residual and compares it against RCLOSE.

In LMG1 this was called budget closure criterion. When the scaled norm of the matrix equations is less than this value then the solver iteration stops.

CONTROL. LMG version to use
This variable allows the user to select either LMG1 or LMG2 version of the LMG solver.

DAMP. Acceleration Parameter
This value is used if the acceleration method is set to constant. Usually, this value is 1.0, but for some problems lower values may help achieve convergence.

DUP. Max Acceleration
This is the maximum damping value when using the adaptive damping with relative reduced residual.

DLOW. Min Acceleration
This is the minimum damping value when using the adaptive damping with relative reduced residual.

Conjugate Gradient
Controls whether the conjugate gradient method is used to accelerate the solver. By default this option is on.

Stor1, Stor2, Stor3
These values are ignored in LMG2. In LMG1, these variables are used to control the amount of memory storage used by the solver. The defaults rarely need to be changed.

IOUTAMG. Output control
This controls the information printed to the SAMG output file while the solver is running. It has four options, Print level 0, 1, 2, and 3.

Reset
This button will change all options to the default state.