The UPW (UPstream Weighting) flow package can only be used in a MODFLOW-NWT model. The UPW flow package is based on the LPF package but differs in that the rewetting and vertical conductance correction options are not available. Also, in a simulation including extraction wells with the LPF package, as soon as the cell goes dry the pumping stops, but with the UPW package the pumping continues at a reduced rate because of the different way wetting and drying are handled. By default the UPW package does not assign the HDRY value to cells that go dry unless the IPHDRY variable is turned on. It also differs from the LPF package in that it smoothes the horizontal conductance and storage change functions to have a continuous derivatives so they can be solved by the Newton method. Using the UPW package requires using the NWT solver, though the NWT solver can be used with the LPF package instead.

The UPW Package is available through the MODFLOW-NWT tutorial. 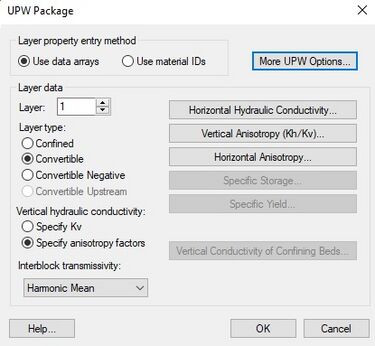 This field displays the current layer. Selecting any of the input array buttons will display the corresponding layer initially. For multiple layer models, this field can be incremented or decremented to show other layers.

Clicking on the More UPW Options button brings up the UPW Package Options dialog where it is possible to remove vertical leakance correction or set a head value for dry cells. 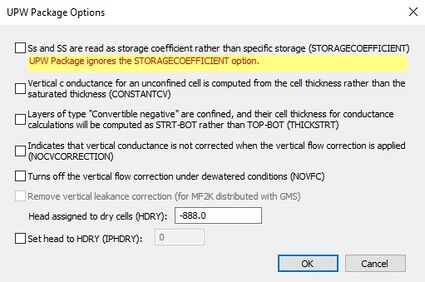