The MODFLOW Subsidence (SUB) package simulates aquifer compaction and land subsidence. The SUB package includes the ability to simulate compaction in both elastic (recoverable) and inelastic (not recoverable) interbeds. It also includes the ability to simulate interbeds where drainage from the interbed is immediate (no-delay) or delayed. The MODFLOW SUB package can generate a binary vertical displacement file that is read by GMS and displayed as a dataset in the MODFLOW solution in the Project Explorer. A detailed description of the SUB input is available at the USGS website. 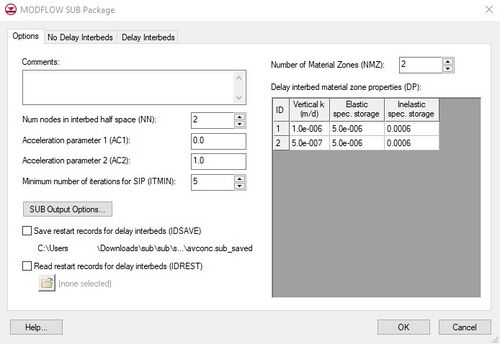 No Delay and Delay Interbed Tabs

These two interbed tabs provide an interface for editing interbeds. In the spreadsheet to the left, interbeds can be added and removed. Also, the interbed's model layer can be set. The array spreadsheet to the right behaves similar to other areal spreadsheets. To edit a particular interbed array, select the row for the desired interbed in the spreadsheet at the left, and then select the desired array from the View/Edit combo box. The 2D Dataset → Array button can be used to set the viewed array values to a 2D dataset provided the 2D grid has the same number of rows and columns as the 3D grid. The Array → 2D Dataset button can be used to copy the viewed array to a 2D dataset; the same grid size limitations apply. The Constant → Array button can be used to set all of the values in the viewed array to the same value. 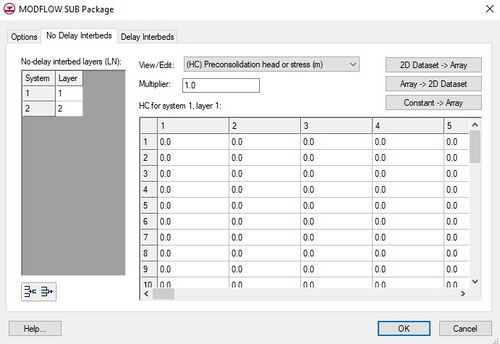