A MODFLOW model can be created in GMS using one of two methods: assigning and editing values directly to the cells of a grid (the grid approach), or by constructing a high level representation of the model using feature objects in the Map module and allowing GMS to automatically assign the values to the cells (the conceptual model approach). Except for simple problems, the conceptual model approach is typically the most effective.

In addition to the feature data, a conceptual model may include other data (scatter points, boreholes, solids) to define the layer elevations. A specialized set of tools for manipulating layer elevation data is provided in GMS.

Steps in Developing a Conceptual Model

In many cases, it is useful to repeat some, but not all, of these steps. For example, suppose after running a simulation it is determined that one of the boundaries of the model corresponding to a groundwater divide is not properly located. The boundary can be moved by simply selecting and dragging the vertices and nodes of the arc(s) defining the boundary. Once the boundary is moved, step 6 should be repeated to redefine the active/inactive regions and then step 8 is repeated to reassign the model data to the cells.

To illustrate the conceptual model approach, consider the site shown in the following figure. It represents information that might be available from a combination of sources including maps, photos, and GIS data. This information may include the location of hydrologic features as well as hydrologic properties of the site. However, this information is not yet organized into a form that is useful to a numerical model. 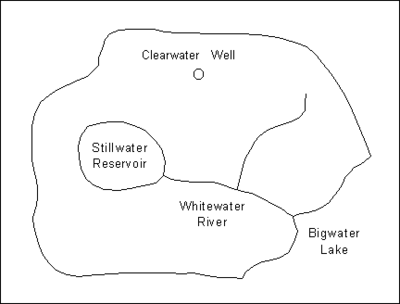 The first step in creating a conceptual model of this site is to create points, arcs and polygons that represent hydrologic features at the site. These points, arcs and polygons are assigned types that correspond to the feature they represent. Based on the attribute type, parameters such as head, concentration and conductance are assigned to these feature objects. The resulting coverage is shown in the following figure. Other coverages, defining such things as recharge zones, would also be defined. 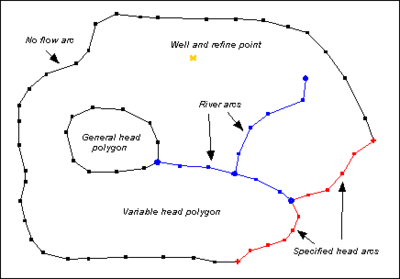 The final step is to take the information that is stored in the conceptual model and construct a numerical model. GMS automates both the creation of the grid geometry as well as assigning boundary conditions and material parameters to the grid. Refine points can be used to specify areas where the grid should have a high density. By specifying polygons that represent the domain of the model, it is possible to automatically inactivate all the cells that lie outside that domain. Boundary conditions may be applied to the individual cells that are intersected by specified feature objects. In addition to determining which cells are assigned boundary conditions, GMS also calculates the appropriate values to assign to each stress period of a transient simulation. The resulting numerical model is illustrated in the following figure. 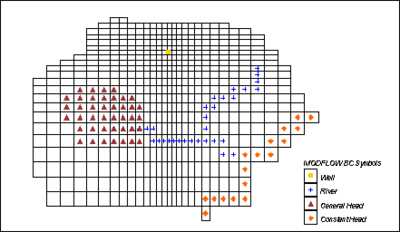 Advantages of the Conceptual Model Approach

There are numerous benefits to the conceptual model approach. First of all, the model can be defined independently of the grid resolution. The modeler does not need to waste valuable time computing the appropriate conductance to assign to a river cell based on the length of the river reach within the cell. This type of computation is performed automatically. Furthermore, transient parameters such as pumping rates for wells can also be assigned independently of model discretization. Transient parameters are entered as a curve of the stress vs. time. When the conceptual model is converted to the numerical model, the transient values of the stresses are automatically assigned to the appropriate stress periods. Since the conceptual model is defined independently of the spatial and temporal discretization of the numerical model, the conceptual model can be quickly and easily changed and a new numerical model can be generated in seconds. This allows the modeler to evaluate numerous alternative conceptual models in the space of time normally required to evaluate one, resulting in a more accurate and efficient modeling process.

A further advantage of storing attributes with feature objects is that the method of applying the boundary conditions to the grid cells reduces some of the instability that is inherent in finite difference models such as MODFLOW and MT3DMS. When entering individual values for heads and elevations, entering cell values one cell at a time can be tedious. It is also difficult to determine the correct elevation along a river segment at each cell that it crosses. The temptation is to select small groups of cells in series and apply the same values to all of the cells in the group. This results in an extreme stair-step condition that can slow or even prevent convergence of the numerical solver. By using GMS to interpolate values at locations along a linear boundary condition such as a river, it is insured that there will be no abrupt changes from cell to cell-thus minimizing the stair-step effect. It also produces a model with boundary conditions that more accurately represent real world conditions.

An important part of a MODFLOW model is the definition of the layer data (hydraulic conductivity, layer elevations, leakance, etc.). While both the Grid and Map module approaches to constructing a MODFLOW model can be used to define the layer data, both approaches may lead to an overly simplistic definition of the stratigraphy. Layers with spatially varying thicknesses can be handled most effectively using a special set of layer data tools provided in GMS. Solids can also be used to define layer data with the Solids→MODFLOW and Solids→HUF commands.