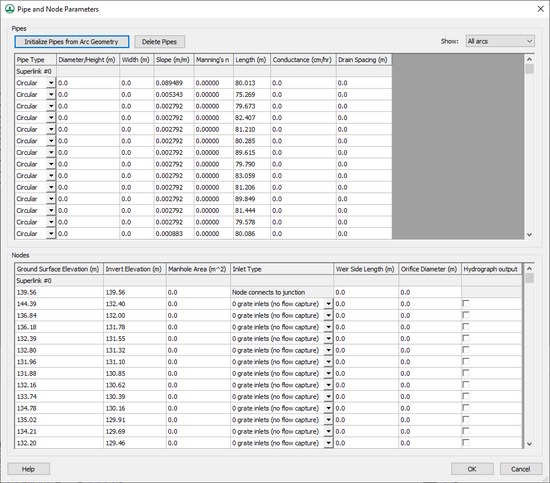 The GSSHA Pipe and Node Parameters dialog is accessed by clicking

in the Edit Pipes and Nodes column in the GSSHA feature arcs Properties dialog. This is only accessible when a GSSHA storm drain coverage is active. This dialog is used for building and editing the pipes and nodes associated with superlinks (arcs) and superjunctions (nodes) when running a GSSHA storm and tile drain simulation.

If a specific parameter needs to be copied to all or some other pipes or nodes below the one currently selected, click and hold the small square at the bottom right corner of the selection and drag down until the value is copied to the desired cells. Double-clicking on this square will copy the selected value to all entries below it.

If wanting all the attributes for the displayed arcs to be the same, set the value in the top cell of the dialog. Double-click on the small square in the lower left corner of the selected field (below) and the attribute will be copied to all the other pipes or nodes that are displayed.

The following buttons are found at the bottom of this dialog:

The superlink number is displayed at the top of each set of superlink attributes.

In the Pipes section, the following options are available at the top:

The spreadsheet has the following columns:

The distribution of vertices (nodes) along an arc (superlink) in the GSSHA storm drain coverage is important in the storm/tile drain model used by GSSHA. Space nodes closely near junctions and farther apart toward the center of the superlink. WMS has an option in the Redistribute Vertices dialog for feature arcs that allows for defining a second bias. Each of the bias values defines the ratio of spacing between vertices at the center of the arc and at the middle of the arc. Use the same bias value along with a specified vertex spacing or a number of vertex segments to define vertices close together at the ends and far apart at the center of the superlink.

WMS 10.0 and later versions also have an option in the WMS Display Options that allows displaying a special symbol for any nodes or superjunctions in the GSSHA Storm Drain coverage that have more than zero inlets.

The Nodes spreadsheet has the following columns: