Most of the SMS modules have a Data menu, but the items in this menu are different for each module. The Mesh Module commands include:

SMS requires that a mesh or grid have bathymetry, or bottom elevation data, associated with the nodes or cells. By default, SMS creates a dataset named "elevation" to store the elevation values. The dataset being used to store elevations is referred to as the mapped dataset.

The Data menus in several modules include a command to use another functional dataset as this mapped elevation function. When this command is performed the Select Dataset dialog opens to allow any existing scalar dataset to be chosen. Any time step of any scalar dataset can be used as the mapped dataset and override the previous nodal elevation values. This is used mainly when interpolating new elevation data from scatter points. 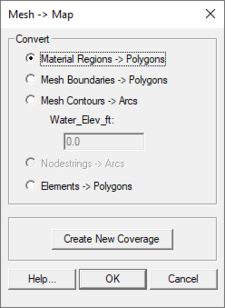 The Mesh → Map command in the Data menu (mesh module) is used to convert mesh data into feature data (map module). This can be useful for creating a conceptual model from an existing numeric model. The Mesh → Map command converts the mesh data and places it in the active coverage. This process makes use of the Mesh → Map dialog which provides conversion options. If wanting the new data in a new coverage, click on the Create New Coverage button to create a new coverage and make it active.

This option converts the materials in the current mesh into polygons in the map module. If the coverage supports materials (area property or most mesh model coverages support this), the polygons will have attributes reflecting the correct material values.

This option converts the current mesh boundaries into polygons in the map module.

This option creates an arc at a specific contour value (based upon the active dataset). It is not necessary for the value to be associated with a displayed contour line as SMS will determine where the line would be if it existed.

This option creates an arc for each nodestring in the mesh. 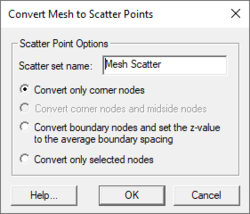 The Mesh → Scatterpoint command in the Mesh Data menu is used to create scatter point data from existing mesh nodes. When this command is performed, the Convert Mesh to Scatter Points dialog appears to request a name for the new scatter point set.